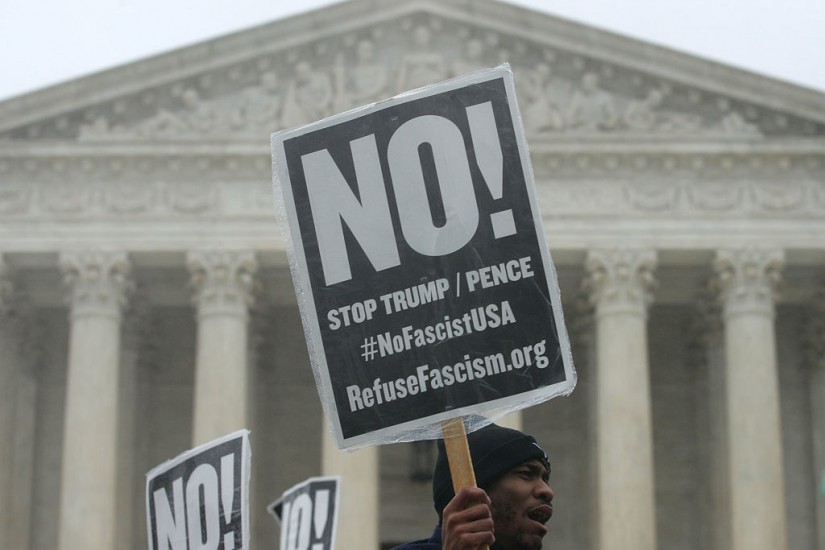 A protester with the group Refuse Fascism holds up a sign at a January 23, 2017 protest in front of the U.S. Supreme Court building.
Alex Wong/Getty Images News/Getty Images

Is Donald Trump a fascist?

It's becoming a common question, with figures like neoconservative columnist Robert Kagan lobbing the accusation, declaring, "This is how fascism comes to America, not with jackboots and salutes (although there have been salutes, and a whiff of violence) but with a television huckster, a phony billionaire, a textbook egomaniac 'tapping into' popular resentments and insecurities, and with an entire national political party — out of ambition or blind party loyalty, or simply out of fear — falling into line behind him."

Kagan is wrong. Donald Trump is not a fascist. "Fascism" has been an all-purpose insult for many years now, but it has a real definition, and according to scholars of historical fascism, Trump doesn't qualify. Rather, he's a right-wing populist, or perhaps an "apartheid liberal" in the words of Roger Griffin, author of The Nature of Fascism. He doesn't want to overthrow the existing democratic system. He doesn't want to scrap the Constitution. He doesn't romanticize violence itself as a vital cleansing agent of society. He's simply a racist who wants to keep the current system but deny its benefits to groups he's interested in oppressing.

Griffin, who is a professor of history and political theory at Oxford Brookes University, puts it best: "You can be a total xenophobic racist male chauvinist bastard and still not be a fascist."