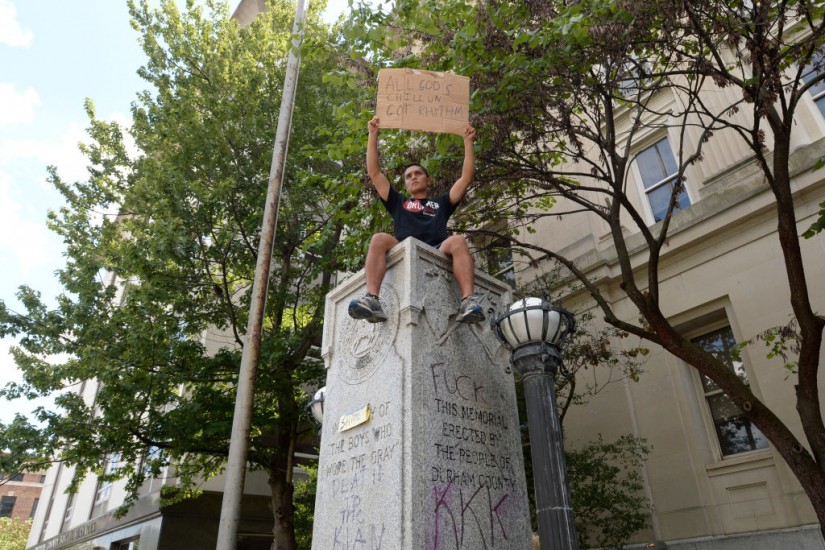 A demonstrator sits atop the defaced pedestal of where a Confederate soldier statue once stood during a rally in Durham, North Carolina on August 18, 2017.
Sara D. Davis/Getty Images
…

Law is inseparable from violence. Behind the Constitution lie an insurrection, the torture of British troops and Loyalists by American revolutionaries, and the expulsion of the remaining Loyalists from the American colonies. (This is not to mention the genocide of Native Americans.) Behind the Reconstruction amendments, which put the principle of equality in the federal constitution for the first time, are Gettysburg and Appomattox. But the same goes for anti-discrimination statutes: in the end, it is a cop who will tear down the whites-only sign. This is very close to the heart of what makes it law: the capacity to command “legitimate” (circularly enough, “lawfully begotten”) violence.

Consider even the peaceful legal process of decision-making. Some set of rules, as clean as a simple referendum or as strange and junked-up as the Electoral College, results in a decision that counts as final. This decision is a substitute for settling the question by force. Of course, if you continue to resist that decision, what you get is . . . force—official force. What law does, then, is guide, limit, and launder violence by tying it to rules and procedures, and classifying it as legitimate within those rules, lawless outside it.

This “laundering”—a deliberately provocative word—is necessary in a complex and organized society. Yet laundered violence can never be entirely legitimate, either measured by its own principle (it will always betray its own claims to be fair and restrained—so people who have reason to be afraid of the police and the legislature see the “legal process” very differently from those who don’t) or by the hearts and bodies of those who have to live with it (people will always doubt, refuse, and resist it). It answers questions, but it does not resolve them.

Law is partly a peace treaty, arranged on unequal terms. The end of the Civil War was literally a peace treaty between white victors and the white vanquished, and subsequent history, especially the Jim Crow period when most of the Confederate statutes went up, rehabilitated the vanquished at the expense of their non-white victims. No wonder anti-racist resistance has often included arming one’s self and one’s community against the Klan and other vigilantes, in the Jim Crow period and in the civil rights era.