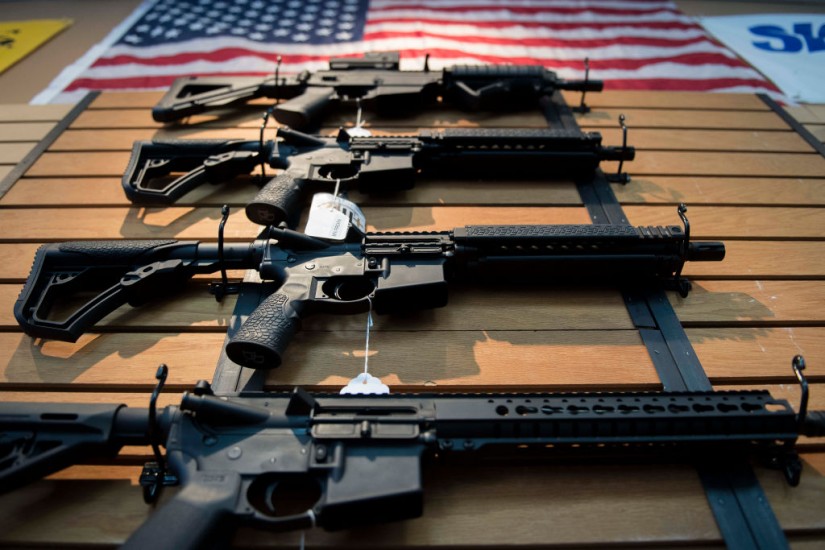 Assault rifles hang on the wall for sale at Blue Ridge Arsenal in Chantilly, Virginia, on October 6, 2017.
JIM WATSON/AFP/Getty Images
…

The 1994 law included a ban on 18 specific models of assault weapons, as well as a ban on any firearms containing certain military-style features, like a bayonet mount, a flash suppressor or a folding stock. It also banned high-capacity magazines capable of holding more than 10 bullets. The bill allowed individuals already in possession of such weapons to keep them. It was also set to expire after 10 years' time.

“The original intent of the assault weapons ban was to reduce the carnage of mass shootings,” Klarevas said. “And on that front the data indicate that it worked.”

Klarevas has compiled data on gun massacres involving six or more fatalities for the 50 years before 2016. His numbers show that gun massacres fell significantly during the time the assault weapons ban was in place, and skyrocketed after the ban lapsed in 2004. A separate mass shooting database compiled by Mother Jones magazine shows a similar trend.

Klarevas wasn't surprised by the 2004 report showing the ban had little effect on overall rates of gun crime. “If there was going to be any benefit on [overall] violent crime, that would have been a pleasant surprise,” he said. But, “the real objective of the assault weapons ban was always to reduce both the frequency and lethality of mass shootings.”

Klarevas is particularly concerned about what the numbers show for the years after Congress allowed the assault weapons ban to lapse. Guns like the ones used in Parkland and in other mass shootings are now among the most popular firearms currently on the market. The proliferation of these guns means that would-be mass shooters have little trouble obtaining them.

“In the last three years we have had as many gun massacres with assault weapons as in the decade prior,” Klarevas said. “The trend is continuing to escalate.”