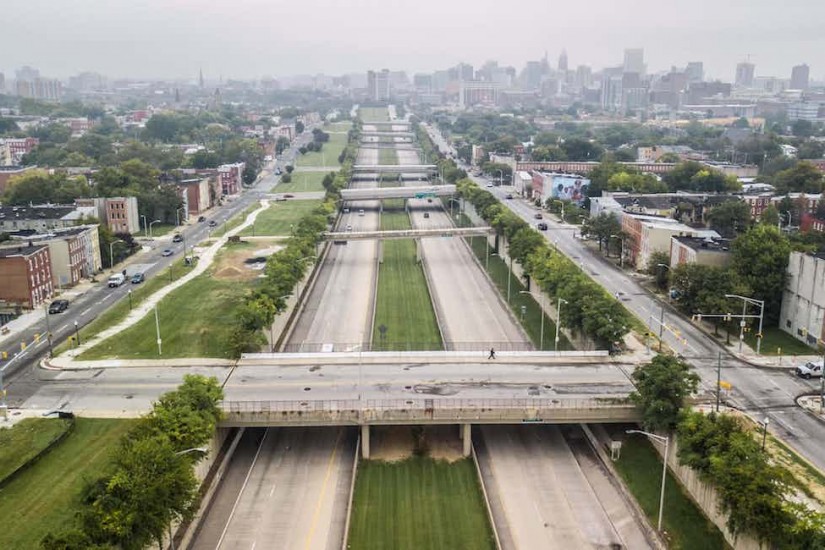 Nowhere is infrastructure so obviously divisive as with the vast interstate highway system. Ubiquitous, generally free and heavily used, it’s undeniably a vital part of the American experience. There are more than one million miles of federal aid highways in the US, which cost $105bn a year to maintain. If American highway spending were a country, it would have the world’s 63rd largest GDP, just behind Morocco. But while these roads unify and connect millions of the country’s citizens, they’ve also excluded and destroyed many black communities.

West Baltimore is an exceptionally bleak area in an exceptionally poor, overwhelmingly black American city. The city recorded 343 homicides in 2017, the highest murder rate per capita in the country. It’s almost double that of Chicago, and 18 times higher than New York City. Racial divisions run deep here, a segregation of opportunity, class and even life expectancy.

On a humid September morning, police cars darted furiously through empty streets, their sirens blaring. In front of the housing complex where Freddie Gray was killed in 2015, two white police officers questioned a young black man in an SUV, their hands resting on their weapons. Many of the homes have boarded-up windows and doors, and even wooden scaffolding to prevent them from collapsing. The city has more than 16,000 abandoned properties, some of them vacant for decades.

In the middle of this blight stands a monument to failed American city planning: a giant ditch that bisects West Baltimore neatly into north and south. Officially named State Route 40, it was originally intended to be a key part of a proposed east-west freeway presented as crucial to the city’s growth. This gigantic project upended hundreds of lives, transformed an entire landscape and cost tens of millions of dollars. The locals call it the “road to nowhere”.