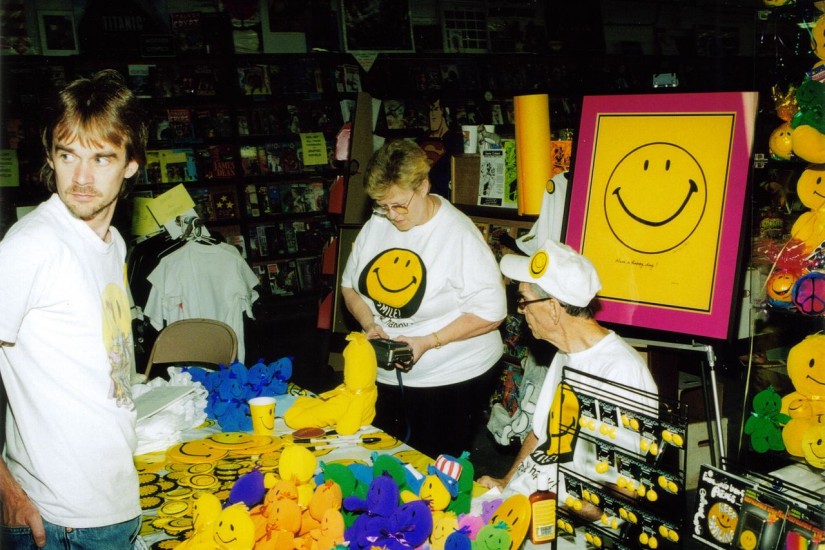 1.
The “original” smiley face was drawn in 1963 by commercial artist Harvey Ball for a campaign to boost morale among employees brooding over an ominous merger at State Mutual Life Assurance of Worcester, Massachusetts. Ball’s fee: $45.

2.
By the early 1970s, the smiley had become a ubiquitous peace icon-cum-cheerleader, thanks to Bernard and Murray Spain, two brothers from Philadelphia who made fortunes off their sundry smiley products (50 million buttons alone were sold). Sales spiked when the Spains gave voice to their cash cow, bestowing its enduring exhortation: “Have a Nice Day!” Ball, who never made another cent off his design, was said to have found the expression “insipid.”

3.
But of course Ball’s wasn’t the very first smiley. This smiley petroglyph was found in Frijoles Canyon, New Mexico, where the Pueblo Indian culture dates back 3,000 years. Millennia of drought, relocation, conquest, and now this: For the past decade or so Native-American activists have fought and mostly lost a series of battles against new commuter highways linking suburban developments to downtown Albuquerque—built right alongside the Petroglyph National Monument, home to 20,000 sacred petroglyphs.

4.
Mars’s Galle Crater, better known as the “Happy Face Crater,” photographed by the Mars Global Surveyor Orbiter in 1999. Wrought by a meteor, it’s about 134 miles across. (According to NASA’s website, “It looks like Mars is happy to see us!”) Current NASA funding for the Spaceguard Survey, the primary means of earth’s defense against asteroids and comets: $4 million per year. Estimated cost for George W. Bush’s man-on-Mars space initiative: $500 billion to $1 trillion.

5.
The emoticon, first posted on an online bulletin board in 1982 by Scott Fahlman, a computer scientist at Carnegie Mellon University, was invented as a way to indicate humor or sarcasm. Who knew digital epistles would turn out to be so much funnier than their paper forebears? “It didn’t seem like a big deal at the time,” Fahlman reflects. Today, anecdotal evidence suggests that more blossoming love affairs have been called off over one party’s horror at discovering the other’s use of emoticons than over differences on abortion, political affiliation, and capital punishment combined.