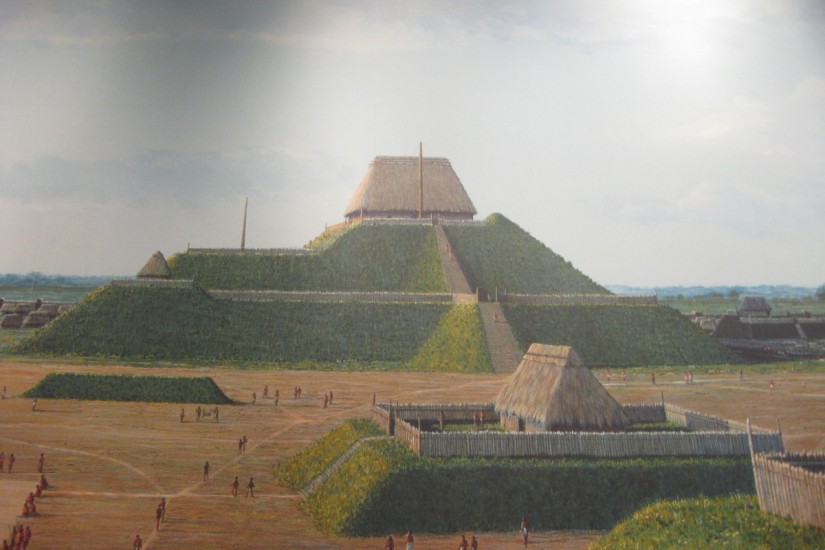 Artist's recreation of downtown Cahokia, with Monk's Mound at its center.
Ars Technica

A thousand years ago, huge pyramids and earthen mounds stood where East St. Louis sprawls today in Southern Illinois. This majestic urban architecture towered over the swampy Mississippi River floodplains, blotting out the region's tiny villages. Beginning in the late 900s, word about the city spread throughout the southeast. Thousands of people visited for feasts and rituals, lured by the promise of a new kind of civilization. Many decided to stay.

At the city's apex in 1050, the population exploded to as many as 30,000 people. It was the largest pre-Columbian city in what became the United States, bigger than London or Paris at the time. Its colorful wooden homes and monuments rose along the eastern side of the Mississippi, eventually spreading across the river to St. Louis. One particularly magnificent structure, known today as Monk’s Mound, marked the center of downtown. It towered 30 meters over an enormous central plaza and had three dramatic ascending levels, each covered in ceremonial buildings. Standing on the highest level, a person speaking loudly could be heard all the way across the Grand Plaza below. Flanking Monk’s Mound to the west was a circle of tall wooden poles, dubbed Woodhenge, that marked the solstices.

Despite its greatness, the city’s name has been lost to time. Its culture is known simply as Mississippian. When Europeans explored Illinois in the 17th century, the city had been abandoned for hundreds of years. At that time, the region was inhabited by the Cahokia, a tribe from the Illinois Confederation. Europeans decided to name the ancient city after them, despite the fact that the Cahokia themselves claimed no connection to it.

Centuries later, Cahokia's meteoric rise and fall remain a mystery. It was booming in 1050, and by 1400 its population had disappeared, leaving behind a landscape completely geoengineered by human hands. Looking for clues about its history, archaeologists dig through the thick, wet, stubborn clay that Cahokians once used to construct their mounds. Buried beneath just a few feet of earth are millennia-old building foundations, trash pits, the cryptic remains of public rituals, and in some places, even, graves.

To find out what happened to Cahokia, I joined an archaeological dig there in July. It was led by two archaeologists who specialize in Cahokian history, Sarah Baires of Eastern Connecticut State University and Melissa Baltus of University of Toledo. They were assisted by Ph.D. candidate Elizabeth Watts of Indiana University, Bloomington, and a class of tireless undergraduates with the Institute for Field Research. Together, they spent the summer opening three large trenches in what they thought would be a sleepy little residential neighborhood southwest of Monk's Mound.

They were wrong. The more they dug, the more obvious it became that this was no ordinary place. The structures they excavated were full of ritual objects charred by sacred fires. We found the remains of feasts and a rare earthen structure lined with yellow soils. Baires, Baltus, and their team had accidentally stumbled on an archaeological treasure trove linked to the city's demise. The story of this place would take us back to the final decades of a great city whose social structure was undergoing a radical transformation.