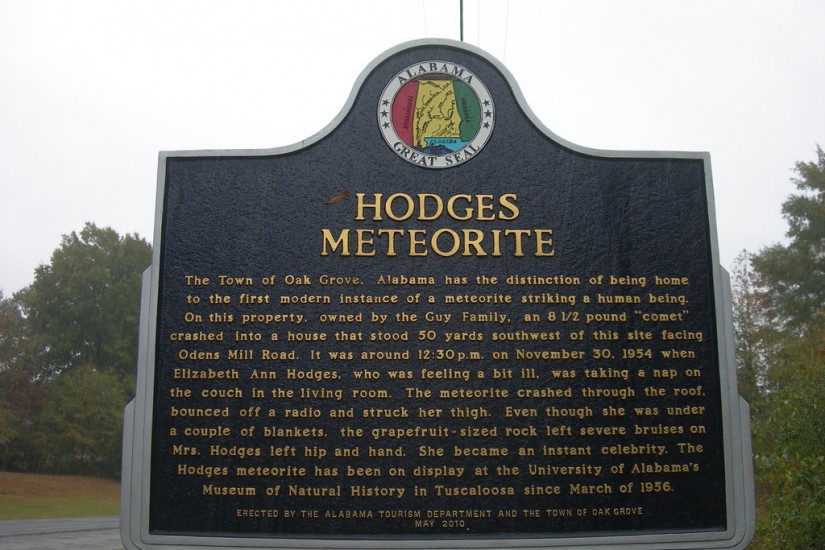 On a clear afternoon in Sylacauga, Alabama (see map) in 1954, Ann was napping on her couch, covered by quilts, when a softball-size hunk of black rock broke through the ceiling, bounced off a radio, and hit her in the thigh, leaving a pineapple-shaped bruise.

Ann's story is particularly rare because most meteorites usually fall into the ocean or strike one of Earth's vast, remote places, according to Michael Reynolds, a Florida State College astronomer and author of the book Falling Stars: A Guide to Meteors & Meteorites.

"Think of how many people have lived throughout human history," Reynolds said.

"You have a better chance of getting hit by a tornado and a bolt of lightning and a hurricane all at the same time."

Before the meteorite slammed into Ann's living room, people in tiny Sylacauga and across eastern Alabama had reported seeing "a bright reddish light like a Roman candle trailing smoke," according to the Web publication "The Day the Meteorite Fell in Sylacauga," which was produced by the Alabama Museum of Natural History in 2010.

Others saw "a fireball, like a gigantic welding arc," accompanied by tremendous explosions and a brown cloud.

A government geologist working in a nearby quarry was called to the scene and determined the object was a meteorite, but not everyone in town was so sure, according to the museum publication. Many thought a plane had crashed—others suspected the Soviets.

So many people flocked to Hodges's house that when her husband, Eugene Hodges, a utility worker, returned home from work, he had to push gawkers off the porch to get inside.

Ann was so overwhelmed by the crowd that she was transferred to a hospital. With Cold War paranoia running high, the Sylacauga police chief confiscated the black rock and turned it over to the Air Force.

After the Air Force confirmed it was a meteorite, the question then was what to do with it. The public demanded the space rock be returned to Ann, and she agreed.

"I feel like the meteorite is mine," she said, according to the museum. "I think God intended it for me. After all, it hit me!"

But there was a hitch. Ann and Eugene were renters, and their landlady, a recently widowed woman named Birdie Guy, wanted the meteorite for herself.