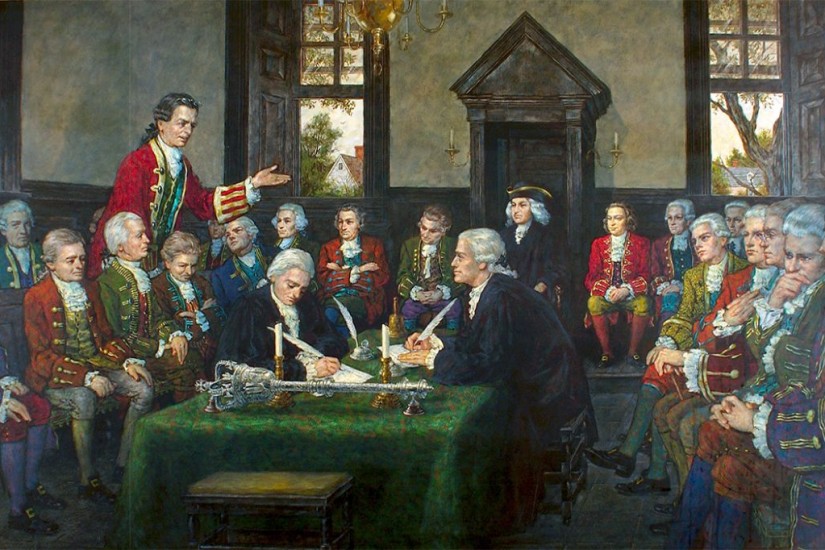 A painting portraying the fifth Virginia Revolutionary Convention during the adoption of the Virginia Declaration of Rights.
Jack Clifton/Library of Virginia
…

“What is your definition of a ‘well-regulated militia,’ as stated in the Second Amendment?” Rogers asked Dana Loesch, a spokesperson for the National Rifle Association (NRA). “And using supporting detail, explain to me how an 18-year-old with a military rifle is well-regulated? And the world, our country, our nation, is going to grade your answer.”

Loesch responded: “George Mason was one of the founding fathers, and he said ‘The militia is the whole of the people.’ It’s every man, it’s every woman, that is who the militia is. In the context of the time, a well-regulated militia meant an American man, an American woman, a citizen of the United States of America, who could operate and service their firearm.”

If she were taking a history exam, Loesch’s response would likely have scored an F.

Mason, a Virginia politician and anti-Federalist, was one of only three delegates to the US Constitutional Convention of 1787 to refuse to sign the Constitution. He authored the Virginia Declaration of Rights, which later served as an influence for the United States Bill of Rights—and it was during the debates at the Virginia Ratifying Convention, where many of the ideas for the Bill of Rights would be generated, that he spoke the words Loesch used in her answer.

Loesch’s intent, in using this particular quote, was likely to show that one of America’s founding fathers, who provided inspiration for the Bill of Rights itself, believed that every person in the country had the right to own a gun, and that owning and operating a gun made them part of the militia. Therefore, as part of the militia, their right to own guns cannot be infringed.

But Mason’s quote doesn’t just mean something different “in the context of the time.” It means something entirely different in the context of the actual, complete quote. Loesch’s misreading, deliberate or otherwise, not only undermines the grounds on which she and the NRA base their definition of a “well-regulated militia” and who belongs to it, but subverts her authority to speak to what the Founding Fathers intention was in creating the Second Amendment.