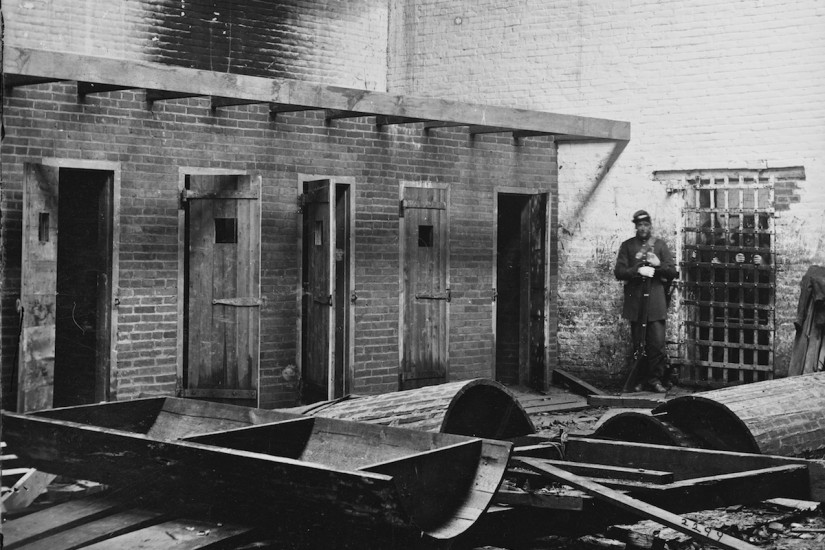 Slave pen, Alexandria, VA. Photo ca. 1861-1869.
Library of Congress
For decades before the Civil War, slave markets, pens and jails served as holding cells for enslaved African-Americans who were awaiting sale. These were sites of brutal treatment and unbearable sorrow, as callous and avaricious slave traders tore apart families, separating husbands from wives, and children from their parents. As the Union army moved south during the Civil War, however, federal soldiers captured and repurposed slave markets and jails for new and often ironic functions. The slave pens in Alexandria, Virginia, and St. Louis, Missouri, became prisons for Confederate soldiers and civilians. When one inmate in St. Louis complained about being held in such “a horrible place,” an unsympathetic Unionist replied matter-of-factly, “Yes, it is a slave-pen.” Other slave markets, such as the infamous “Forks of the Road” at Natchez, Mississippi, became contraband camps—gatherings points for black refugees from bondage, sites of freedom from their masters, and sources of protection and assistance by Union soldiers. Ex-slaves relished seeing these paradoxical uses of the old slave pens. Jermain Wesley Logan had escaped slavery to New York in 1833 and returned to Nashville in the summer of 1865, where he found his elderly mother and old friends he had not seen for more than 30 years. “The slave-pens, thank God, have changed their inmates,” he wrote. In place of “the poor, innocent and almost heartbroken slaves” who for years had been held captive there as they awaited sale to the Deep South, Loguen found “some of the very fiends in human shape who committed those diabolical outrages.” Loguen turned his eyes to the heavens. “Their sins have found them out,” he wrote, “and I was constrained to give God the glory, for He has done a great work for our people.”

During and after the war freedmen and women used old slave jails as sites of public worship and education. A black Congregational church met at Lewis Robard’s slave jail in Lexington, Kentucky, while Robert Lumpkin’s notorious brick slave jail in Richmond became the home of a black seminary that is now known as Virginia Union University, a historically black university. “The old slave pen was no longer the ‘devil’s half acre’ but God’s half acre,” wrote one of the seminary’s founders. For slave markets to become centers of black education was an extraordinary development since southern states had prohibited teaching slaves how to read and write.