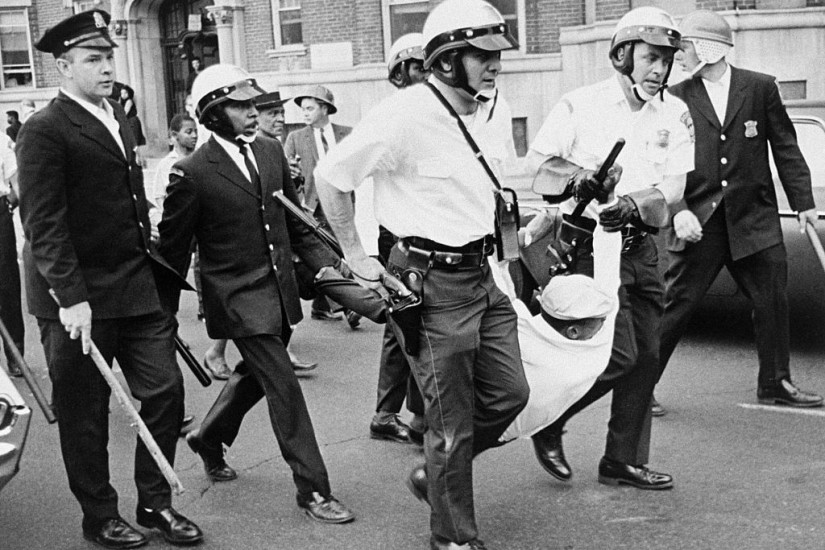 Helmeted police riot guards drag a rioter away from the scene of violence in Newark after a second night of racial disorder on July 14, 1967.
AFP/Getty Images
…

By calling for more restrained anti-riot measures, the Kerner report may well have saved lives in 1968 and beyond. For example, the commission emphatically rejected lethal use of force against looters (which was favored by 60 percent of white Americans). The report devoted a chapter to the breakdown of the criminal justice system during the riots, which saw hundreds of unnecessary arrests, with many of the arrested held in undisclosed locations, without charge and with no way to contact relatives or lawyers. The Kerner report also discredited misconceptions about widespread sniper fire, finding most reported instances were actually indiscriminate shooting by the police and National Guard. It correctly identified “police incidents” as the most common cause of the riots. It criticized overpolicing of black neighborhoods through stop-and-frisk and other aggressive methods. It detailed how police were untrained for riot control and unprepared for the difficult roles assigned to them, which resulted in overreaction and lack of fire discipline.

The report was absolutely correct when it said it was unfair to single out police for simply enforcing society’s will and that police reform could only succeed in the context of a broader assault against inequality. Yet by calling police “symbols” of “white power, white racism, and white repression,” the report downplayed the significant ways in which police were not merely symbols of a fatal problem but its agents. The report adopted a “he said, she said” approach that portrayed police brutality simply as African Americans’ “belief” or “perception.” Criticism of “overreaction” and lack of police “restraint” in the report obscured the reality of intentional police destruction of African American property and lives.

The commission deliberately chose to disregard information about police vigilantism that its own research had uncovered. Two commission investigators examined police killings and found several “flagrant” instances of police rearranging bodies to appear as if they had been involved in looting. In fact, the rejected draft of the report, “The Harvest of American Racism,” which Zelizer discusses at some length, candidly acknowledged the “lawless violence” of the police. It detailed the “breakdown of order” among the police and labeled them “one of the most reactionary and racist institutions of white society.” During the riots, it concluded, police operated “according to the same principles of crowd behavior that motivate the Negro riots” and acted out of “desire to vent individual hostilities, to re-establish police authority, and avenge police honor.”