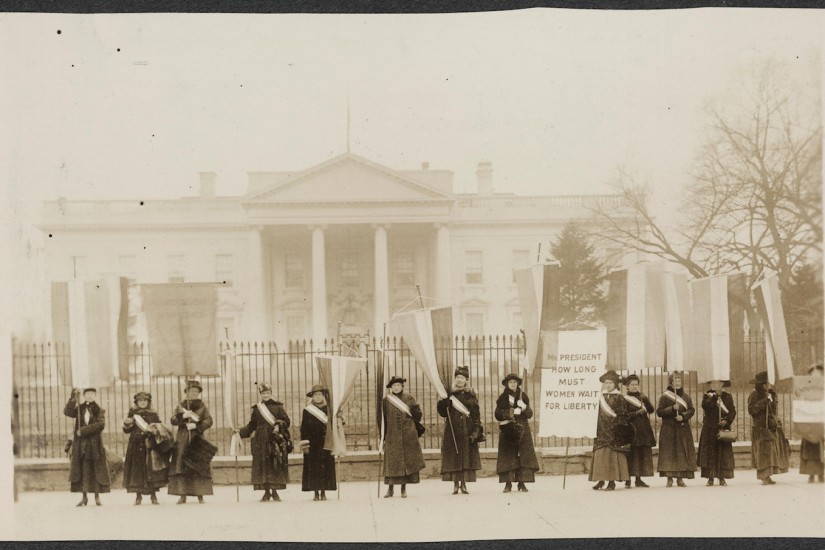 Suffragists protesting at the White House (1917).
flickr.com/usembassythehague
…
A woman born in May 1914 has lived through a litany of historical milestones and pivotal moments. My grandmother married late, because few could afford to set up a home during the Great Depression. Though she lived in New York for most of her life, she spent much of the 1940s on an Army base in Mississippi. She was widowed young, because 1956 medical science couldn’t save her first husband. She raised daughters during the 1960s, and she watched them walk through newly opened doors ? to universities, to workplaces, to lives spent writing the kinds of documents that make it into history books ? that had been closed to their mother, and to all the women who came before them. She’s voted in every election since 1936. (The vote she cast that year, for Franklin Delano Roosevelt, was her favorite of them all: “You never forget your first time.”) In our most recent election, she voted for a woman.
Men wrote this history, but my grandmother observed it, endured it, acted in it and had her life shaped by it in ways she and I can understand ? and in ways we cannot. This is not to say that women do not “make history” in the ways our culture understands it: Women have always been writers, innovators and leaders, even if their lives and their contributions have often been buried. And even if the excavation of those stories has largely been left to amateurs and activists: When artist Judy Chicago set about assembling the list of 999 women to honor in her seminal 1970s installation The Dinner Party, she struggled to find professional historians who would help her.
As the last remaining family member of her generation, for almost two decades my grandmother has been the keeper of family lore and memories. Of our history. Her memory is still good ? a small miracle, given her age ? and a few years ago, she started writing down the stories she wants the rest of us to remember. It’s yet another editing process that will, inevitably, leave information and individuals out of history.
…
View on HuffPost
View Connections