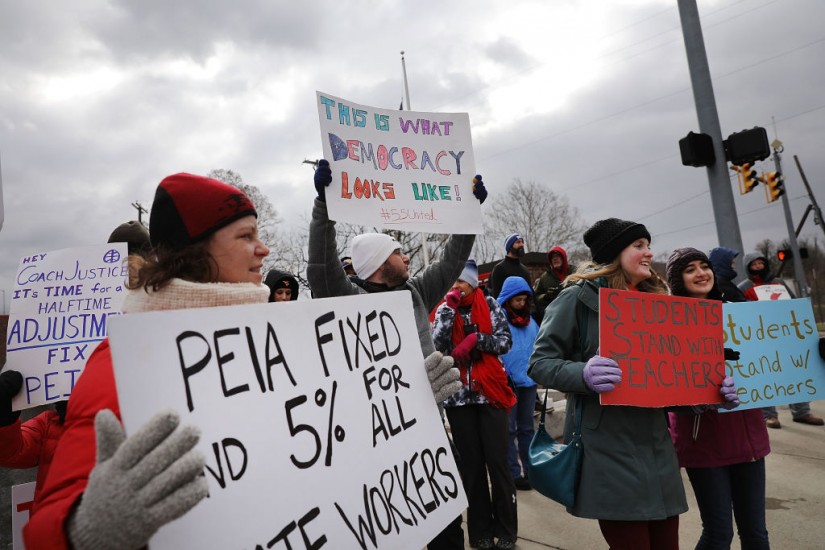 West Virginia teachers, students, and supporters demonstrate on a Morgantown Street on the seventh day of a statewide strike (March 2, 2017).
Spencer Platt/Getty Images
…

Since before most West Virginians knew their land lay over valuable coal and gas, few locals have owned those minerals. They went to a few speculators and the agents of mining and drilling companies, who own most mineral rights and have drawn billions of dollars from the state. There were better jobs for coal miners than for most people, once the United Mine Workers won the coalfields in an alliance with FDR, but local wages never really turned into local capital, and now most of the state is desperate again, with only about 12,000 people working coal jobs. But, despite a downturn in production, plenty of coal wealth comes out of this ground every year, and quite possibly more in natural gas.

The teachers’ movement is a reclamation and redirection of a militant working-class identity. They look back to the miners, look around at the uncompensated wreckage of the land, and look forward to the world we are all entering, where the labor is in social reproduction: teaching, caregiving, the upholding of the human world. They’re taking the miners’ literal banners into that new field, and making a claim along the way on the material wealth of the world, which is going to have to be shared very differently to make a world of caregiving work anything like egalitarian or humane. This is a microcosm, fought over the carbon capital of the industrial age, of the coming fights over who owns and profits from the finer, cleaner capital of mechanized production and digital platforms. The stakes are much the same, from West Virginia to California. Just like a hundred years ago, a place seen as backward may be one of the frontiers of the next labor movement.