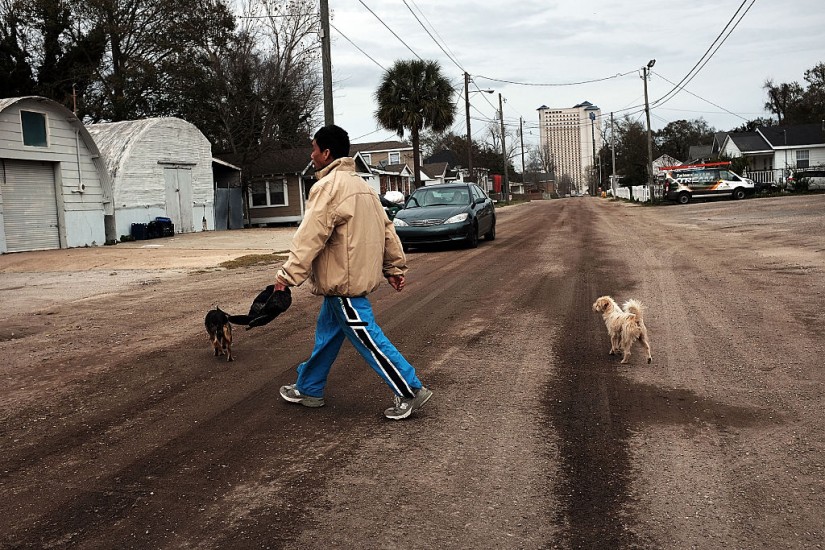 A boy walks across a dirt street in Biloxi, Mississippi. As of January 2016, Mississippi was the poorest state in the country (January 3, 2016).
Spencer Platt/Getty Images
…

Material poverty is persistent, both for my family and for all black Mississippians: It cleaves to generations, passes from grandmother to mother to child like a genetic trait—like a crooked nose, or detached ears, or freckles. It walks hand in hand with a kind of poverty of the imagination, of what is possible, of what we can grow to be. We are at the southernmost tip of Mississippi, but even so, we saw some of what Dr. King and other civil-rights activists accomplished. Some aspects of our lives have changed: We can access the same public beaches as everyone else, on the Gulf of Mexico and on Lake Pontchartrain. We attend desegregated public schools; we can attend any college or state university we desire. We can walk into any public restaurant on the coast and ask to be seated and served, and, often without incident, we are. This was not the case for my parents and grandparents. I grew up to be a writer, an artist, but I came to this in spite of my poverty, which insisted that my desire to create was frivolous. Which claimed that it was the natural state of my life, that I and those like me should always want, should always be empty.

The seed of difference, and the belief in our poverty, our inferiority, persists. This seed, present at the beginning of our subjugation as slaves, has sprouted and thrived as virulently as kudzu. It has strangled us for hundreds of years. Under the thin veneer of mutability, the belief that anyone of African descent is inferior still flourishes: sunk into the soil, springing from the well of the rivers. It made itself known after emancipation, when minor offenses committed by black people led to imprisonment for crimes such as vagrancy and loitering and petty thievery, especially of food, and black men and women were essentially re-enslaved; a century later, some civil-rights activists in Mississippi would be sentenced to the notorious Parchman Farm to suffer torture. The belief made itself known when Mississippi finally ratified the Thirteenth Amendment, banning slavery—on February 7, 2013. Now it makes itself known in the letters to the editor of local papers, where white people excoriate any and all activities associated with black college students’ spring-break festivities. It makes itself known when high-school football players take a knee in solidarity with Colin Kaepernick, and then the parents of their white classmates call them nigger thugs. It made itself known on Martin Luther King Jr. Day in 2017, when the city of Biloxi declared that it would celebrate “Great Americans Day” instead.