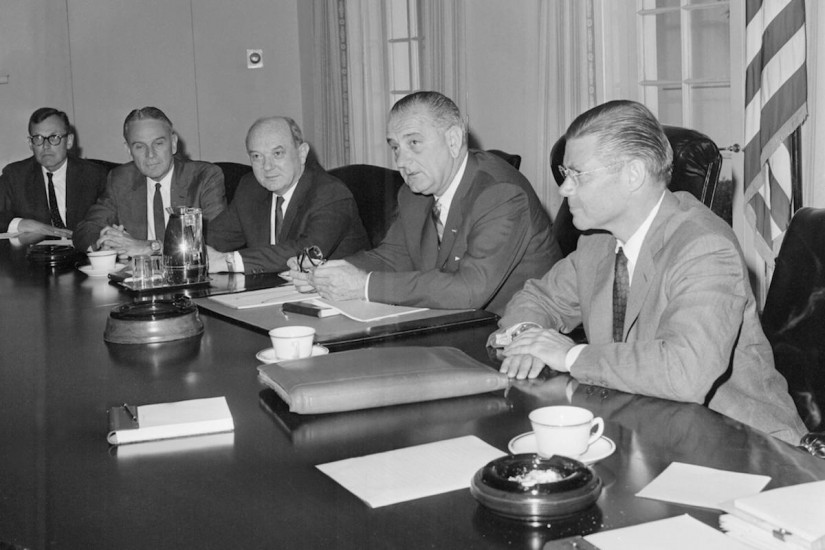 Secretary of Defense McNamara, President Lyndon Johnson and Secretary of State Dean Rusk meet with the US Ambassador to South Vietnam on 11 September 1964.
AFP/Stringer

The rush to war. The use of faulty intelligence. A seemingly unending conflict, with few discernible checks on the presidential use of military force.

While these ghosts of Vietnam prefigure elements of America’s wars in South Asia and the Middle East — indeed, around the globe — what’s different about the political climate then and now is that 50 years ago this week, the U.S. Senate decided to do something about it. That effort, though late in coming, serves as a telling reminder to our Congress about its proper role — even its duty — to pronounce on when and why the president can send U.S. forces into harm’s way and in our country’s name.

Eager to claw back some of the power it had relinquished to the executive branch as the United States ratcheted up the war in Vietnam, the Senate Foreign Relations Committee (SFRC), chaired by Sen. J. William Fulbright (D-Ark.), held a hearing in February 1968 on the Tonkin Gulf incidents — the murky events of August 1964 that resulted in Congress giving President Lyndon B. Johnson a “blank check authorization for further action,” as Defense Secretary Robert S. McNamara described it. This authorization opened the door to America’s escalation of the conflict.

In essence, Congress transferred its war powers to the president, sanctioning all levels of military activity without a declaration of war.

This fateful move came after Johnson and his aides received reports that North Vietnamese torpedo boats had attacked a U.S. destroyer, the USS Maddox, on Aug. 2, 1964, and the destroyer Turner Joy and the Maddox again on Aug. 4. To them, it suggested that Hanoi was intensifying its war against South Vietnam and its American patron. Having held his fire after the Aug. 2 attack, Johnson responded to the apparent second incident with airstrikes, the first U.S. bombing of North Vietnam.