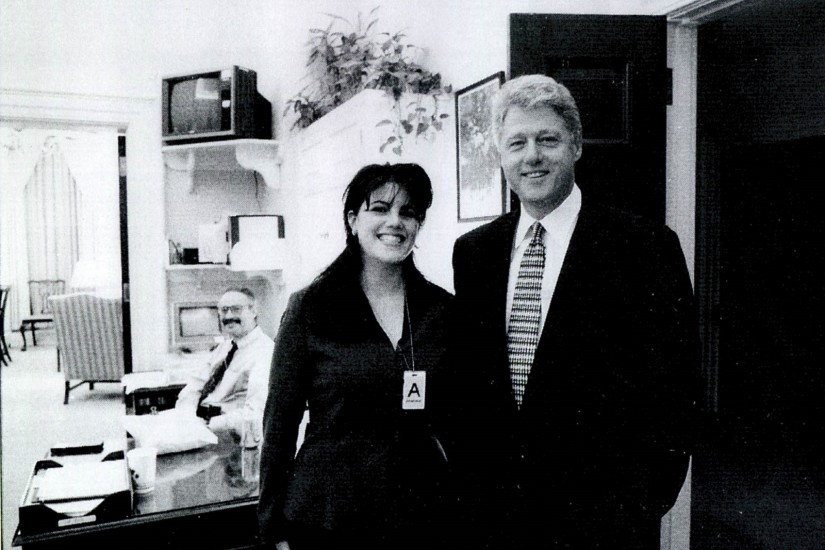 Friend goes further, positing that the decade institutionalized what he calls “the Long Lie”. Revelations of sports doping would later bring down 90s heroes such as Mark McGuire, Sammy Sosa and Lance Armstrong; plastic surgery was so extreme as to revel, Joan Rivers-like, in its falseness; the introduction in 1990 of Adobe Photoshop enabled even photographs to dissemble. It was the “Amplified Age”, Friend writes, “implants and avatars . . . Cialis and cyborgs . . . tribute bands and Civil War reenactors . . . securities fraud and ‘creative accounting’ . . . counterfeit products and antique reproductions . . . stop-action animation and CGI . . . reality TV and virtual reality”. Among Clinton’s first acts as President was the implementation of “Don’t Ask, Don’t Tell”, which allowed gay and lesbian Americans to serve in the military so long as they remained closeted – essentially mandating a lie about sex. In fact, Friend notes, the first encounter many Americans had with Clinton the presidential candidate was his 1992 appearance on 60 Minutes, during which he lied on record about having had a sexual relationship with Gennifer Flowers. And, of course, in his second term, he was nearly removed from office for lying under oath about yet another extramarital affair. “I did not have sexual relations with that woman, Miss Lewinsky” – a lie – became one of the most memorable quotations of the decade.

The moral issue, according to Friend, became whether or not equivocation, especially on the subject of sex, was merely an instance of a broader (and culturally acceptable) form of “Don’t Ask, Don’t Tell” or a disastrous weakening of society’s larger moral codes. The American public, broadly speaking, seems to have gone with the former: even during the revelations of his affair with Lewinsky, Clinton still enjoyed approval ratings of over 70 per cent. There is a way in which Friend seems to consider this a liberal victory, crediting Clinton with breaking down conservative moral absolutism. And yet the normalization of playing fast and loose with the truth – epitomized by Clinton’s other notorious soundbite of the day, “it depends on what the definition of ‘is’ is” – set the stage for today’s morally relative, “post-fact” society and the political rise of Donald Trump.