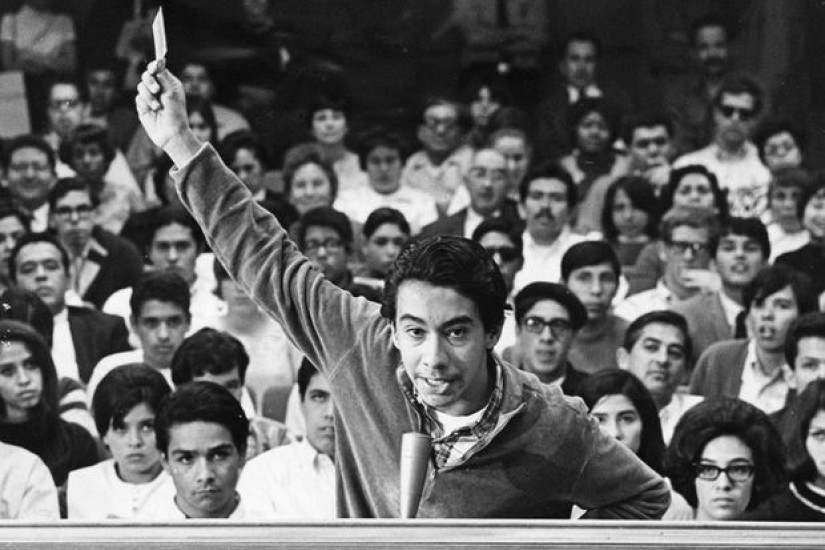 Peter Rodriguez, Wilson High School student, at the microphone of a school board meeting, waving his draft card to prove his participation in the walkouts was not communist inspired.
Los Angeles Public Library

On March 1, 1968, about 250 students led by drama kids upset that the principal canceled an upcoming performance of Neil Simon’s Barefoot in the Park tried to walk out of Wilson High School in Los Angeles. The action sparked what’s now known as the East Los Angeles Blowouts, in which thousands of Chicano students left their classrooms to protest rundown campuses, racist teachers, and apathetic counselors. The marches and rallies brought national attention to the Chicano civil rights movement, created a generation of leaders, and still inspire activists 50 years later.

And this important moment in Chicano history happened in large part because of a rabbi and his Jewish youth camp.

Camp Hess Kramer in wealthy Malibu is about an hour and a half away and a world apart from the working-class, Mexican-American high schools of East L.A. But its oak-filled hills and cozy cabins, site of Reform Jewish teen retreats for more than 65 years, has hosted an annual camp for Chicano students for almost as long. Why a Jewish facility hosted such a uniquely Mexican-American event is all gracias to Rabbi Alfred Wolf, who long administered Hess Kramer for Wilshire Boulevard Temple. The interfaith pioneer was a longtime ally to Los Angeles Chicanos, standing with them on issues of police brutality and even once allowing protestors to use the Wilshire Boulevard Temple parking lot as a base to protest arch-conservative Archdiocese of Los Angeles Cardinal Francis McIntyre, who held services at St. Basil’s Church just a block away.

Wolf opened up Hess Kramer almost from its start in 1952. In 1963, in his capacity as chair of the Los Angeles County Commission on Human Relations, he helped to organize the first of what was eventually called the Chicano Youth Leadership Conference (CYLC). Its purpose was to get the best and brightest Mexican-American high schoolers in Southern California together for a weekend of introspection, growth, and leadership training. Wolf provided Hess Kramer; major financial sponsorship came from Tobias Kotzin, a Jewish trouser manufacturer who employed hundreds of Mexican-American women at his Los Angeles factory.