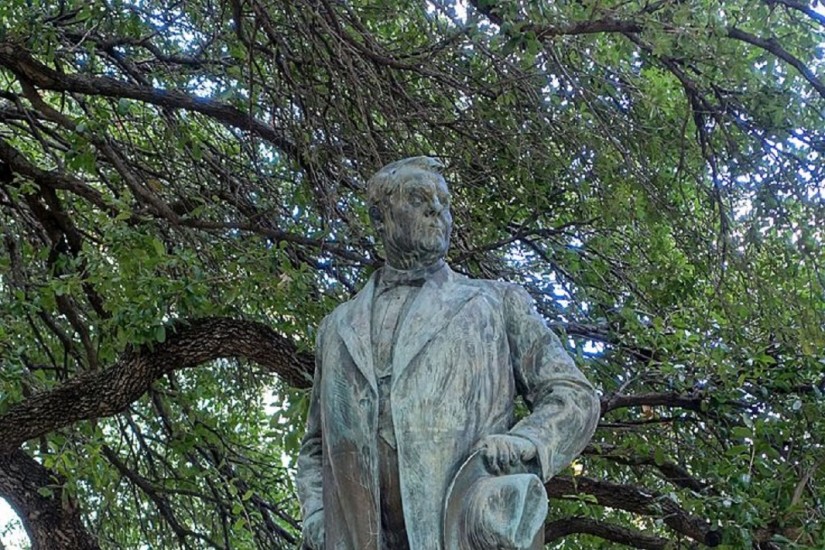 A sculpture of John H. Reagan, Postmaster General of the Confederacy, at University of Texas, installed in 1933 and removed in 2017.
Daderot/Wikimedia Commons

As a cultural geographer, I often teach history to help students understand how the everyday landscapes that frame our lives and give meaning to our daily activities are the products of specific cultural and political projects of the past (and of the present). I’ve also found myself teaching about history itself: about the process by which history and historical knowledge is established and perpetuated.

For the past 10 years, I’ve taken students in my Contemporary Cultural Geography class on an on-campus field trip to observe six statues that were installed on our campus (the University of Texas at Austin [UT]) in the 1920s as part of a commemoration to the Confederacy. The statues were commissioned by early benefactor and UT Regent George Washington Littlefield, who had been a Confederate soldier during the Civil War. Reputed to be the richest ex-Confederate at the turn of the twentieth century, Littlefield made his money in ranching and banking, and spent his later years engaged in a series of projects to embed symbols of the Confederacy in public spaces and historical sites across the South, in an attempt to reshape history and normalize white supremacy.

Littlefield also funded the study of Southern history in UT’s history department. He specifically wanted historians at UT to champion the Lost Cause ideology and establish the “Southern” perspective on the Civil War and Reconstruction: that the war had not been about slavery and that Reconstruction was a form of Northern retribution that went too far. This perspective was used to justify and legitimate the turn-of-the-century political order, rooted in white supremacy and institutionalized in the Democratic Party across the south.

In our current moment, the story of Littlefield’s work to further the political project of white supremacy can help illuminate how the landscapes that we inherit, and which are currently being reshaped by the removal of Confederate statues, were produced.