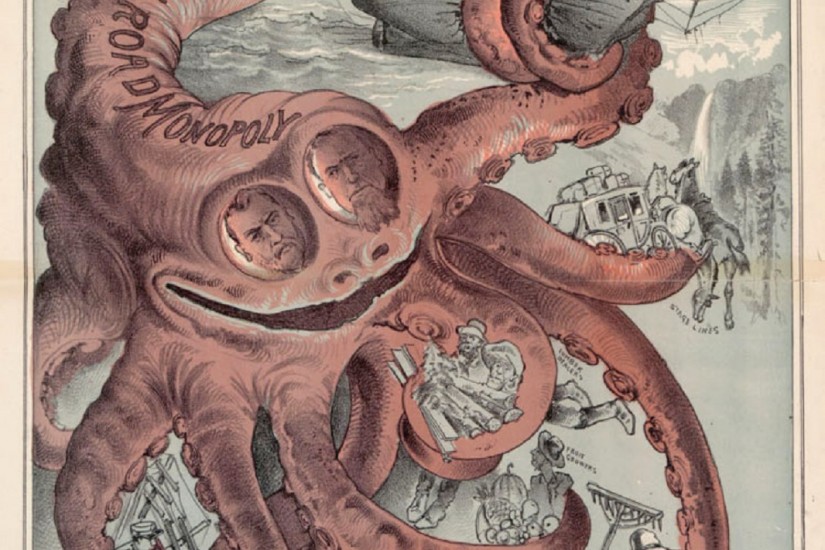 "The Curse of California," an 1882 illustration portraying the powerful railroad monopoly as an octopus.
G. Frederick Keller/Wikimedia Commons

Late 19th-century Americans loved railroads, which seemed to eradicate time and space, moving goods and people more cheaply and more conveniently than ever before. And they feared railroads because in most of the country it was impossible to do business without them.

Businesses, and the republic itself, seemed to be at the mercy of the monopoly power of railroad corporations. American farmers, businessmen and consumers thought of competition as a way to ensure fairness in the marketplace. But with no real competitors over many routes, railroads could charge different rates to different customers. This power to decide economic winners and losers threatened not only individual businesses but also the conditions that sustained the republic.

That may sound familiar. As a historian of that first Gilded Age, I see parallels between the power of the railroads and today’s internet giants like Verizon and Comcast. The current regulators – the Federal Communications Commission’s Republican majority – and many of its critics both embrace a solution that 19th-century Americans tried and dismissed: market competition.

In the 1880s, the most sophisticated railroad managers and some economists argued that railroads were “natural monopolies,” the inevitable consequence of an industry that required huge investments in rights of way over land, constructing railways, and building train engines and rail cars.

Competition was expensive and wasteful. In 1886 the Atchison, Topeka and Santa Fe Railway and the Missouri Pacific Railroad both built railroad tracks heading west from the Great Bend of the Arkansas River in Kansas to Greeley County on the western border, roughly 200 miles away. The tracks ran parallel to each other, about two miles apart. Charles Francis Adams, president of the Union Pacific Railroad, called this redundancy the “maddest specimen of railroad construction of which” he had ever heard. And then his own railroad built new tracks into western Kansas, too.

After ruinous bouts of competition like this, rival railroad companies would agree to cooperate, pooling the business in certain areas and setting common rates. These agreements effectively established monopolies, even if more than one company was involved.