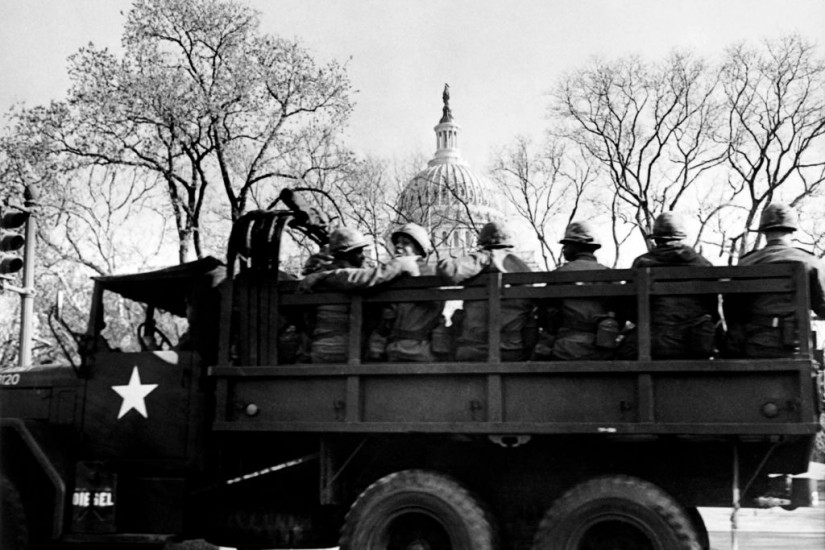 National guard troops patrol in Washington DC on April 05, 1968 after President Johnson called out troops to keep order in the wake of the assassination of Martin Luther King.
AFP/Getty Images
…

A single bullet fired from a Remington rifle traveled through King’s spine on April 4. The revolution died with him; the country caught fire.

It would not be an exaggeration to say that the atmosphere across the nation immediately following King’s death carried a whiff of the brimstone of end-times. Thousands of black youths in ghettos across more than 100 cities spilled into the streets in sorrow and rage during the Holy Week Uprising. Police arrested more than 20,000 people, and neighborhoods in Washington, D.C., and Baltimore saw millions of dollars in damage; estimates in Baltimore exceeded $10 million (more than $70 million today). Nationally, amid pitched battles between cops and communities, reports of sniper fire, and conflagrations that consumed business after business, at least 40 people were killed and more than 3,000 were injured in the gravest unrest in America since the Civil War.

King’s assassination was the earthquake among a series of seismic shifts that demolished a certain portion of black intellectual and spiritual movements. Baldwin had been working on a movie script about the life and assassination of his friend Malcolm X, an effort that had been fraught, owing to Baldwin’s desire to explore the deep, lingering racial questions left in the activist’s wake. King’s assassination helped derail that project, and sent many other surviving intellectuals of the civil-rights movement on trajectories that veered away from black activism. The landmark year of 1968 almost saw the death of Baldwin himself; he overdosed on sleeping pills, in what his biographer David Leeming implies was a suicide attempt.

In the immediate aftermath of King’s death, the intensity of the cataclysm became clear to all of black America. Three days after King’s murder, even as the fires across the country raged, Baldwin and King’s friend Nina Simone took to the stage at the Westbury Music Fair, on Long Island. The show had been scheduled long before, but now it had new meaning.

Simone sat down at her grand piano. “Will my country stand or fall?” she sang. “Is it too late for us all?” Her voice wavered between venom and sorrow. “And did Martin Luther King just die in vain?”