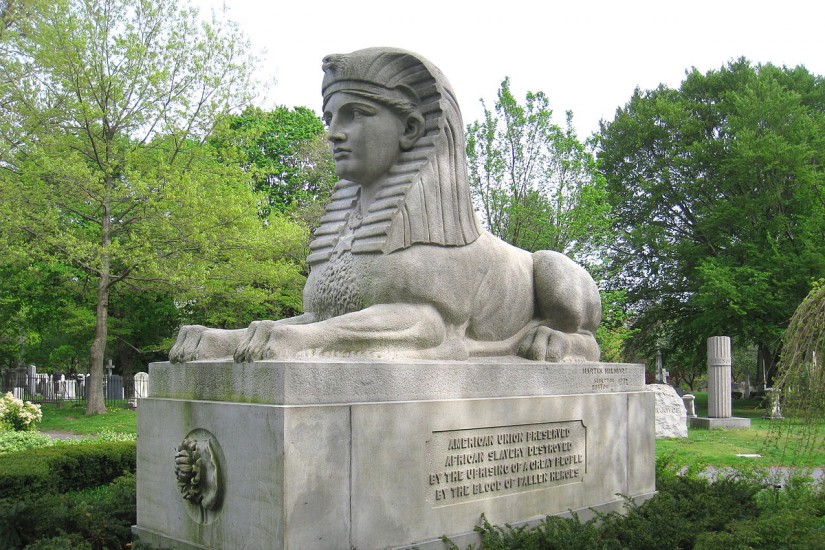 The Sphinx was the vision of Dr. Jacob Bigelow, a Harvard botanist and physician who was one of the founders of Mount Auburn Cemetery. In the wake of the Civil War, he wanted a monument that would honor the sacrifices of the Union army and point the way toward a more integrated America. A figure from Egyptian mythology, the sphinx represents the fusion of both “American” and “African” motifs, a perfect union between black and white.

Bigelow had dreamed up the statue and designed it entirely himself. Egyptian motifs had associated in nineteenth-century America with mourning and grief, but these had never included a sphinx. Bigelow’s monument was to be his own, ex nihilo and sui generis. Bigelow’s dreams swam with hybrid monsters. The Elgin Marbles, he noted, “to which the whole world pays homage,” consist of depictions of centaurs and other strange creatures; and the winged steed Pegasus, “on which poets in all ages have sought recreation,” was also an amalgamation of different beasts. “Even angels,” he concluded, “the accepted embodiments of beauty and loveliness, are human figures with birds’ wings attached to their shoulders.” Why, then, not revere another hybrid, why not create a new mythology?

Bigelow tried to envision a nation beating its swords back into plowshares, commending “a great, warlike, and successful nation, in the plenitude and full consciousness of its power, suddenly reversing its energies, and calling back its military veterans from bloodshed and victory to resume its still familiar arts of peace and good-will to man.” Believing that the final blow had at last been struck, he asked, “What symbol can better express the attributes of a just, calm, and dignified self-reliance than one which combines power with attractiveness, the strength of the lion with the beauty and benignity of woman?”

Bigelow enlisted sculptor Martin Milmore to craft his legacy, and the sculpture bears both Bigelow’s and Milmore’s names on its pedestal. Rather than Lincoln and an emancipated slave, Bigelow made the African component symbolic, attempting to establish a language of aesthetic beauty and still indicate Africanness — as though he might give white America an oblique lens by which to glimpse the black body.