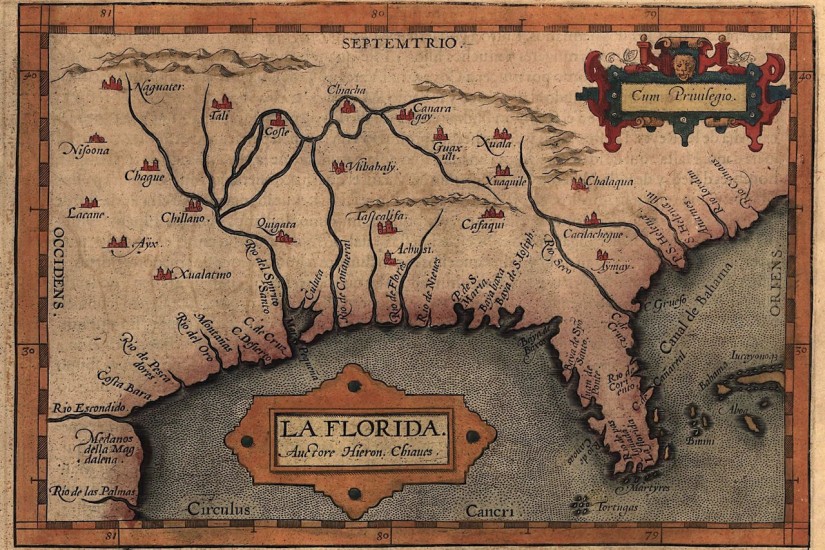 An early map of Florida, based on Hernando de Soto's expeditions.
Library of Congress
…

Florida, it seems, has the perfect mix of weirdness and plasticity to make it the representative stooge within a nation filled with abstract people — neither you nor me, of course — who either gluttonously filled their pockets or absent-mindedly fell asleep at the wheel.

Of course, such depictions in the USA are nothing new. This melting pot of a nation has always singled out representative-ness — good, bad, and ugly — in specific sites and/or constituents (for instance, Alexis de Tocqueville’s fascination with New England towns, the “heartland” producing people with true American values, the white working class and the 2016 election). In these days when comprehensive immigration reform seems distant, when democratic elections seem compromised by voter fraud and/or foreign corruption, when the American dream (*for many citizens) seems less and less available to younger generations thanks to the security-obsessed protectionism of the Boomer generation — see what I did there? — 21st-century Florida has provided an invaluable punching bag of representativeness, a place that stands out from the rest of the honest hard-working nation as peculiar and unsettled — that is, weird.

Turns out our current use of Florida as national outlier has quite a long history. Michele Currie Navakas’s Liquid Landscape: Geography and Settlement at the Edge of Early America convincingly demonstrates that Florida has always — and importantly — compromised master narratives of US nationalism. In this meticulously curated monograph ranging from the colonial era through the early 20th century, Navakas marshals evidence from explorers, cartographers, botanists, geologists, and imaginative writers to support a compelling interdisciplinary argument concerning the centrality of Florida’s peculiar position in North American history. Demonstrating the centrality of Florida in shaking up conventional conceptions and rhetorics that have undergirded property ownership, national expansion, and domestic practices ever since the Enlightenment, Navakas foregrounds a distinctive Florida environment — its marshes, hammocks, reefs, and shoals — as one of the strongest checks on national incorporation and its imperial ambitions. As critics continue to challenge the organizing myths of the US nation and the “roots and routes” of its literary history, Navakas adds an important and impressive new study to the conversation. As it turns out, Florida’s long-term weirdness is kind of a good thing.