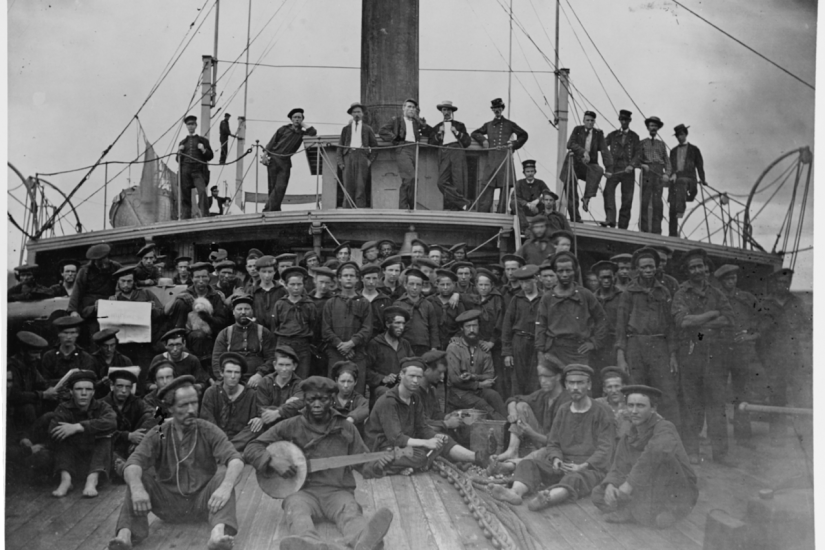 Union sailors on the USS Hunchback, 1864. One-fifth of the sailors pictured are black, and are part of more than 10,000 black sailors who served in the Union Navy.
U.S. Navy
…

The navy always had been racially integrated; there were no laws like the Militia Act. African Americans hazarded their lives and freedom against the nation’s enemies in the colonial and United States navies while achieving a level of respect, relatively fair treatment, and economic opportunities generally not available ashore.

They were fully integrated into ship’s crews. Although performing primarily manual and service functions, they were not restricted to those roles. They equally manned the big guns, were trained in small arms, and performed the myriad of seamanship duties expected. With persistence and performance, African Americans could attain petty officer (non-commissioned) positions equivalent to crewman of European descent and were paid accordingly.

Through the quasi war with France, the War of 1812, and the Mexican War, economic growth and westward expansion generated continuing shortages of merchant sailors for the navy to recruit. Restrictions on enlistment of foreigners and general bias by mariners against navy service created increased opportunity for African Americans. Such service also generated controversy, adding fuel for antislavery advocates in the debates on the meaning of liberty.

Commodore Isaac Chauncy wrote of his African-American crewmen during the War of 1812: “To my knowledge a part of them are not surpassed by any seamen we have in the fleet; and I have yet to learn that the color of the skin…can affect a man’s qualifications or usefulness.” He had nearly fifty onboard and considered many of them among his best men.

Commodore Oliver H. Perry praised the bravery of his many African-American crewmen after the crucial battle of Lake Erie in September 1813. Captain Isaac Hull, commanding the USS Constitution (Old Ironsides) in her desperate struggle with HMS Guerriere concluded: “I never had any better fighters than those n—ers. They stripped to the waist & fought like devils, sir, seeming to be utterly insensible to danger & to be possessed with a determination to outfight white sailors.”

While African Americans faced hardship and death alongside shipmates, such service did not materially improve their lives ashore, and peacetime efforts were made to exclude them from the navy. Navy Surgeon Usher Parsons recorded that they made up a tenth of the crew of the frigates USS Java and the USS Guerrier. “There seemed to be an entire absence of prejudice against the blacks….” That was not entirely true but still it applied much more often than on land.