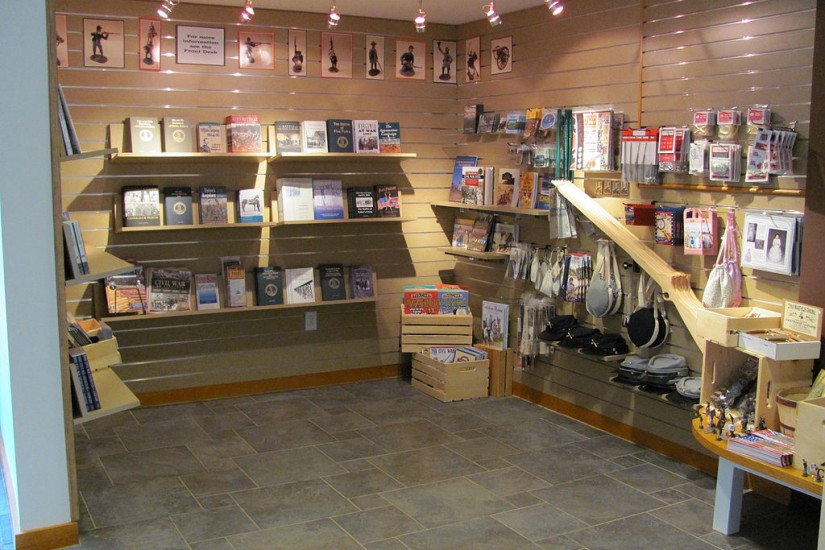 During my most recent visit to the site a few years ago, something struck me while going through the museum gift shop. As I peered through a selection of books and other assorted items, I saw two Civil War kepis with Confederate flag stickers stuck onto the front of the hats. Even stranger, the label on top of the hats described them as “enlisted” hats, and not a single item associated with the United States military—the one Wallace actually fought for—could be found in the gift shop. What were these items doing at the museum of a U.S. General? More specifically, what did mean to see these hats at a museum dedicated to General Wallace, whose efforts at the battle of Monocacy delayed Confederate General Jubal Early’s unsuccessful march to Fort Stevens, a mere five miles from the nation’s capital?

Perhaps these items reinforce Wallace’s desire for sectional reconciliation, a theme he frequently discussed as a popular speaker at Civil War veteran commemorations. Through these speeches he popularized a common belief that battlefields and blue-gray reunions were places for discussing military strategy, not politics. At the dedication of the Chickamauga and Chattanooga Battlefield National Military Park in 1895, for example, Wallace complained that “I am truly unable to understand the Northern soldier who would persecute a soldier of the Confederacy. If there is one such in this assemblage, this is the place above all other for introspection . . . Remembrance! Of what? Not the cause, but the heroism it invoked.”

Whatever may have been the motivation for placing Confederate kepis at the museum of a Union General, the sight provoked within me a number of thoughts about the role of gift shops at Civil War historic sites and what they can tell us about the ways people remember the past.

For one, memory scholars have utterly neglected the role of gift shops and commercialized kitsch in shaping memories of the Civil War. Countless books in recent years have studied postwar reminisces from veterans, public iconography, historical marker texts, museum exhibits, ghost tours, and interpretive programs at historic sites, but almost nothing on gift shops. What is particularly curious about this omission lies in the quantity and prevalence of the items sold in these spaces. Gift shop items ranging from teddy bears, postcards, clothing, posters, toy guns, magnets, replicas of historic documents, and books are sold at these places. They often represent the only tangible item countless millions of people take home from their visit to a historic site.