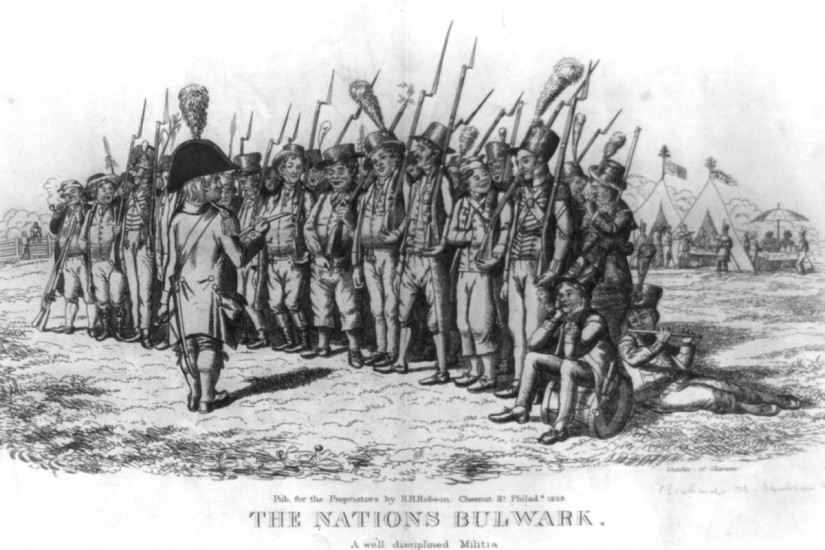 "The nations bulwark. A well disciplined militia." A satire on the Philadelphia militia, by Edward Williams Clay, 1829.
Library of Congress
…

All told, the arms and the military power remained solidly in state hands, with the confederation government taking over only in the direst circumstances, and after humbly asking the states for permission.

In the Constitution of 1787, by contrast, the federal government would control virtually every aspect of war, peace, and military structure. The new Congress could declare war, raise an army, or both, by a bare majority and without consulting the states; Congress was in charge of training and arming the state militias, and could call the militia into service without state permission or even state consultation.

And no more veto over the commander in chief—who would be, by law, the president.

The sole remnant of the states’ power over their own militia appears in Article I § 8 cl. 15, which ended by “reserving to the States respectively, the Appointment of the Officers, and the Authority of training the Militia according to the discipline prescribed by Congress.” And in case there was any doubt about what the federalized militia might be up to, the Constitution provided that it could be called into service “to execute the Laws of the Union, suppress Insurrections and repel Invasions”—that is, perhaps, to march into any state, including its own, to bend its people to the federal will.

All told, the text lays out a stunning power grab. To much of the revolutionary generation, a standing army was the mortal enemy of freedom and self-government. Those ratifying the Constitution had vivid memories of red-clad professional soldiers—some speaking German—swarming ashore to enforce British tax laws, and then to try to crush the Revolution. Now a new government—without so much as saying “by your leave”—could create such a force at pleasure, and send it, and their own militias, to crush any state that did not obey federal ukase. That must have raised hackles from Lexington to Savannah.

That’s the context. To me it suggests that, in adopting what became the Second Amendment, members of Congress were attempting to reassure the states that they could retain their militias and that Congress could not disarm them. Maybe there was a subsidiary right to bear arms; but the militia is the main thing the Constitution revamped, and the militia is what the Amendment talks about.
…
View on The Atlantic
View Connections