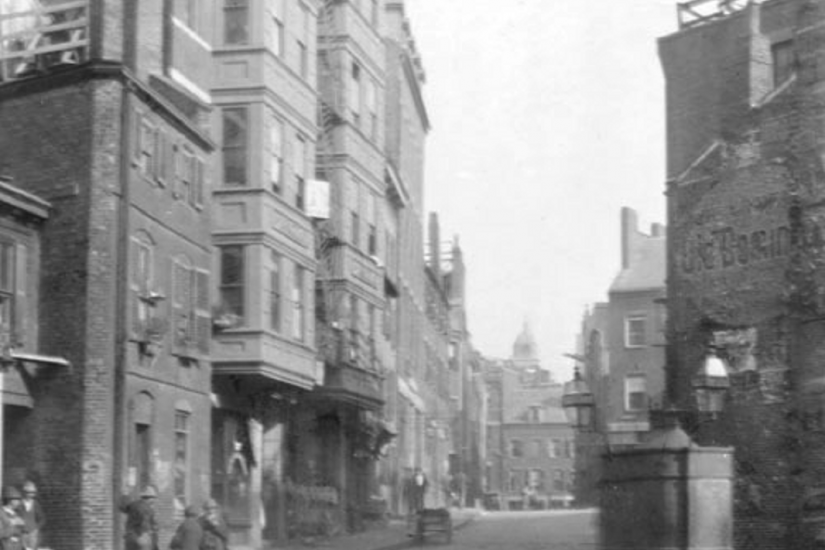 North Street (looking from North Square) in Boston, where brothels were one among many businesses in Boston's North End (ca.1894).
Bostonian Society/Wikimedia

For Jade Luiz, a graduate student in archaeology at Boston University, historical archaeology is all about detective work. Through piecing together historical documents and archaeological finds from the outdoor toilet, or privy, of a former brothel near Boston’s North End, she’s been reconstructing the lives of women who participated in sex work in the mid-1800s.

Louisa Cowen, for example, who in 1856 took over as the madam of 27–29 Endicott Street—the brothel behind which stood the privy—typically presented herself as a respectable widow, according to historical mentions of the brothel and census records. Given her status, she likely wore black clothing and adorned herself in somber black jewelry. Her tombstone names her as the wife of Henry Cowen, a Boston house painter who predeceased her. Whether or not the two had been officially married remains unknown. What Luiz does know is that Louisa Cowen became very successful.

The artifacts from the Endicott Street privy are remarkably complete, and the collection is large. According to Luiz, it looks “like someone was going through closets and dumping everything they couldn’t sell into the privy to seal it off.” She places the timing of this wholesale deposit of household goods to shortly after the property changed hands in 1876. An embossed glass bottle with that date found at the top of the privy heap makes this timeline likely. Despite the fact that these goods were discarded as trash, they now offer clues to the personal etiquette, household ambience, and daily lives of the working women of Endicott Street.

By the 1850s, Boston’s North End, which had been a wealthy neighborhood in the early days of the city, had become a hub of middle-class businesses and immigrant workers. The brothels along Endicott Street were more respectable establishments than those along the harbor a few blocks away that catered to a rougher crowd. Some of the clientele of 27–29 Endicott Street were probably middle-class businessmen who arrived from the nearby rail depot.

For the women of Endicott Street, presenting themselves as clean, fresh smelling, and disease-free was of utmost importance. Bone-handled toothbrushes, American and French perfume bottles, lotion and tooth-wash bottles, and a number of glass syringes that may have been used for douching speak to the women’s high regard for personal hygiene.