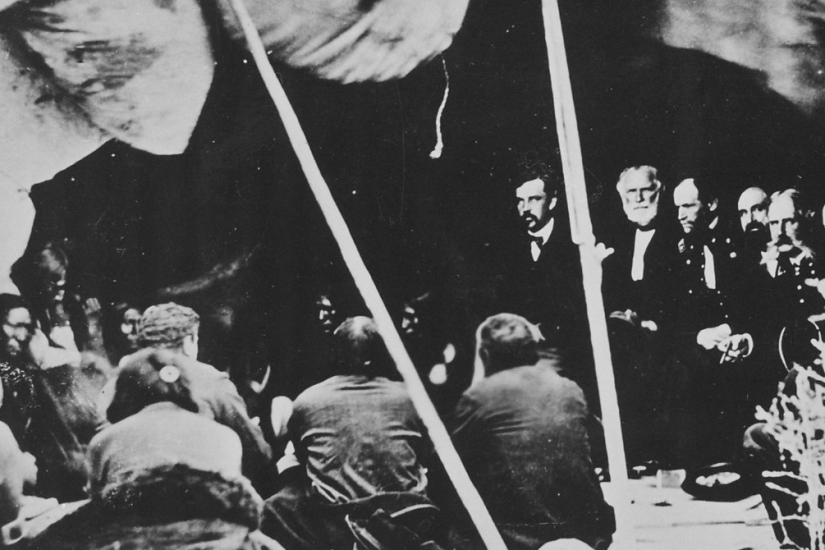 ... within the Louisiana Territory. Made by treaties, agreements, and statutes between 1804 and 1970, these cessions covered 576 million acres, ranging from a Quapaw tract the size of North Carolina sold in 1818 to a parcel smaller than Central Park seized from the Santee Sioux to build a dam in 1958.

... within the Louisiana Territory. Made by treaties, agreements, and statutes between 1804 and 1970, these cessions covered 576 million acres, ranging from a Quapaw tract the size of North Carolina sold in 1818 to a parcel smaller than Central Park seized from the Santee Sioux to build a dam in 1958.

Historians have long known that Indians were paid something for their soil rights, but we’ve never been able to say how much. The closest we had was a guess—about 20 times the acquisition price, or $300 million—floated in the 1940s and erroneously cited as gospel ever since. Figuring out how much the United States has actually spent to extinguish Indian title to the Louisiana Territory, tracked here from 1804 through 2012, yielded a figure much higher than anyone previously imagined—and yet still far from what the land was actually worth. All told, it adds up to about $2.6 billion, or more than $8.5 billion adjusted for inflation.

The trouble with the textbook version of the Louisiana Purchase lies with its easy reduction to a real estate transaction. Europeans had only colonized a tiny fraction of the territory by 1803. Over those areas where they had established control, France sold the United States the right to tax and govern. Over the rest, it sold the right to expand political authority into Indian country without the interference of other would-be colonizers (overlapping British and Spanish claims were settled in 1818 and 1819). In these sections of the purchase, the U.S. acquired the exclusive right to invade or negotiate with indigenous inhabitants for control of their land: to take it by force or buy it by contract.

This right was called “pre-emption,” and it existed merely because those who claimed it said it did, which is why you’ll often find it entombed in scare quotes nowadays. But the distinction between real estate and pre-emption is not a minor or academic quibble. It’s essential to understanding how Thomas Jefferson himself understood the Louisiana Purchase when the deal reached his desk at the White House in July 1803, and it informed the system of treaties that soon began transferring to the federal government the Indian lands west of the Mississippi.

Federal authorities preferred acquiring Indian land by treaties because it was a more humane, and cheaper, method than outright war. But the treaties were backed by the looming threat of violence. The deals the government made specified compensation that came in a variety of forms, from one-time disbursements to annuities, goods, services, and more. In the allotment era, it became increasingly common to promise indirect compensation in the form of pledges to manage assets in tribal trust funds generated by the sale or lease of reservation land. Most arrangements for direct payments have long since ended. They were either broken, amended, exhausted, or, in the case of permanent annuities, commuted for lump sums. Just one lonely line item for Indian land ceded in the Missouri River Valley survives on the federal budget: $30,000 a year to the Pawnees of Oklahoma for 9,878,000 acres of what’s now Nebraska and South Dakota, ceded in 1857.

The breathtakingly stingy offers from the U.S. government reflected the power imbalance between the parties. The first Indian cession within the Louisiana Territory established the mold. In November 1804, a delegation of Sac and Fox Indians came to St. Louis to try to prevent U.S. retaliation for ...