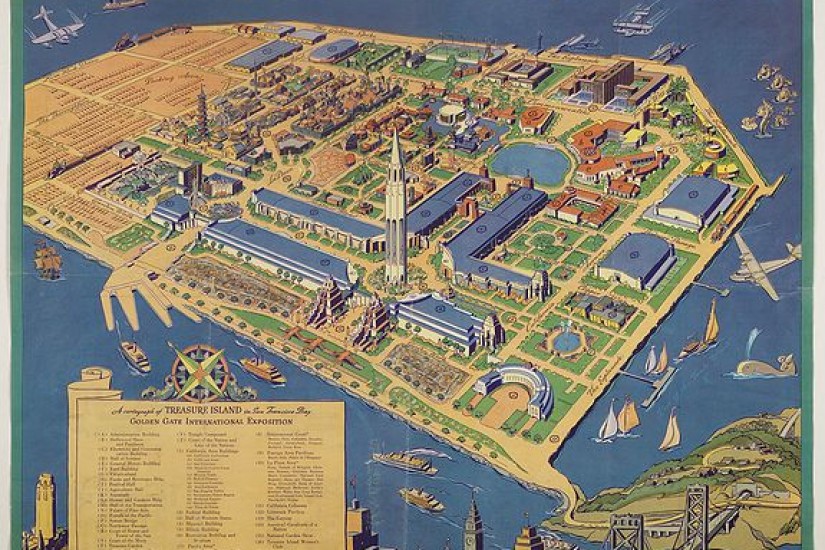 Ruth Taylor's 1939 map, "A Cartograph of Treasure Island in San Francisco Bay," commissioned for the Golden Gate Internation Exposition in 1939 and 1940.
Ruth Taylor/Wikimedia

In 1936, construction began on Treasure Island in the shoals north of Yerba Buena Island, off the coast of San Francisco. The WPA reported that “Rock walls composed of 287,000 tons of quarried rock were sunk in the shoals. Twenty million cubic yards of sea bottom were dredged up and piled within the walls...[and] Barges brought 50,000 cubic yards of loam from the mainland.” “When the engineers finished, a 400-acre island, a mile long and two-thirds of a mile wide, had appeared in the Bay, connected by a 900-foot paved causeway to the Bay Bridge and equipped with ferry slips and landings for small craft and flying boats.” Treasure Island, the world’s largest manmade island, would be the site of the 1939 Golden Gate International Exposition, a walled city that showcased the cultures of the Pacific, including Hawaii, Australia, New Zealand, French Indo-China, The Philippines, and Central and South America.

What is unique about Treasure Island is that it was conceived as both map and landscape. It began as bits—bits of quarried rock, bits of sea bottom, bits of loam. Bits turned into kilobytes, kilobytes turned into megabytes, megabytes turned into gigabytes, and so on. Every bit was accounted for. Treasure Island was a total sum, and the sum of its parts was equal to the whole. Although the official guidebook included a map to the island (see above), this secondary map was redundant. The goal of Treasure Island was complete correspondence. There would be no feature of the Island that would not be self-evident, thus requiring further explanation. The Island was the explanation, and the explanation was the Island.

Maps are containers for information. The engineers of Treasure Island set out to compose a container whose ratio of information to referent, signifier to signified, was 1:1. In order to accomplish this feat, the park had to be entirely superficial. As one report declared, Treasure Island “was the ideal opportunity to create an ‘enchanted island’ free from any necessity to adapt its planned fantasies to existing visual restrictions, either man-made or natural.” In other words, it was essential that Treasure Island refer only to itself. It would be an explicit statement whose signifiers found their denotations within the system itself.