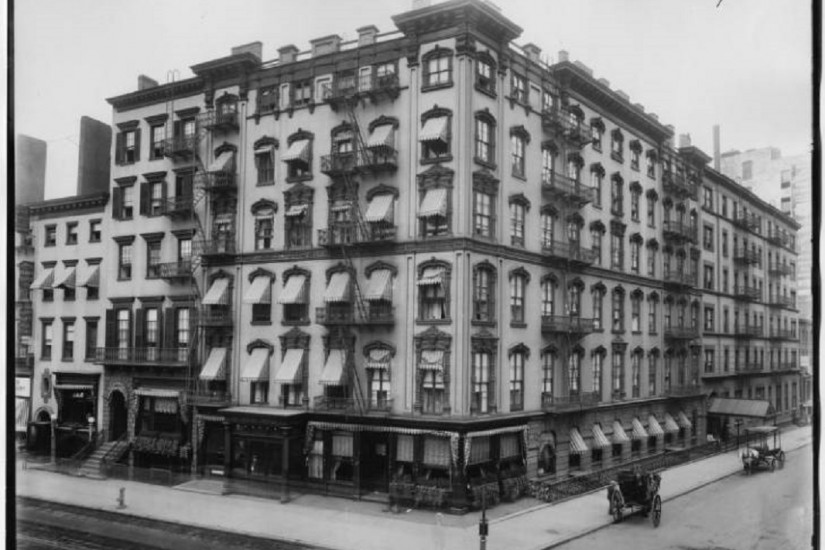 The St. Denis Hotel on Broadway and 11th Street in New York City, sometime between 1876 and 1914.
New York Historical Society

I am one of the last tenants of the St. Denis, a 165-year-old building on the corner of Broadway and East 11th Street, just south of Union Square in New York City, that is in the process of being emptied and readied for gutting. It is quiet in my office, early morning before my psychotherapy patients arrive. My four large windows overlook a courtyard and the angled back sides of three buildings, their walls a geometric patchwork of brick. Pigeons purr on a sill. In the NYU dormitory across the way, a student has decorated her window with paper snowflakes. It is winter and I hope to see a real snowfall one more time before I go. The St. Denis is desolate. Only two dozen tenants are left. There used to be hundreds.

For decades, the St. Denis has been a haven for psychotherapists of every sort: classical Freudian analysts and new-age Zen psychologists, existential counselors and gender specialists, therapists who use art, dance, and neurofeedback. We’ve shared the building’s six floors (plus one semi-secret half-floor on the un-seventh) with other small businesses, mostly providers of wellness—Rolfers, Reiki healers, craniosacral balancers, Feldenkrais practitioners, acupuncturists, Pilates instructors, and at least one psychic who does past-life regressions.

“The building should be levitating with the amount of healing that goes on,” says psychologist Jessica Arenella. In her office on the second floor, she worries about what the loss of the building means for the changing city. “This building was a holdout. It’s not corporate. Tearing it down is part of the death of the Village. Everything’s become so capitalistic and market-driven. There used to be diners around here. Now it’s all just places to get an $8 juice.”

There also used to be more psychotherapists, clustered together in buildings on the streets around Union Square, but a seismic shift is taking place and the therapist buildings are getting squeezed. There was 88 University Place and its northern wing, 24 East 12th Street, both bought by a fashion designer in 2015 for $70 million, emptied, and installed with WeWork co-working spaces. There is 817 Broadway, sold in 2016 to Taconic Investment Partners, who’ve begun to reposition the property for the tech industry, wrapping it in a glossy banner that declares it “The address of innovation.”