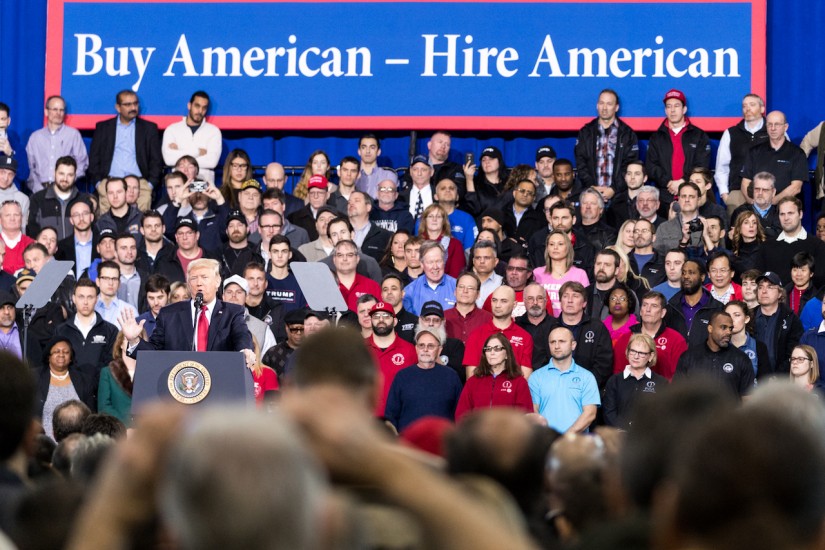 If there’s anything that says “It’s like the New Deal never happened,” it is the picture of steelworkers flanking a Republican president as he signs proclamations announcing aluminum and steel tariffs in 2018. Although many think of the GOP today as the party of free trade — a reputation built through the staunch support of Presidents Ronald Reagan, George H.W. Bush and George W. Bush — that reputation is a relatively recent development.

In fact, a Republican president embracing protectionism actually returns the party to its pre-1933 origins, when Republicans stood for high tariffs and a protected market, and organized workers stood with them. The American Federation of Labor (AFL), the largest labor organization in the early 20th century, was officially nonpartisan, but its leaders promoted the tariff as a way to keep wages high. Workers’ economic interests were thus aligned with those of the Republican Party. That alliance made it very difficult for Democrats — then the party of free trade — to make much progress with their trade agenda.

That all changed with Franklin D. Roosevelt, whose administration would, among other things, pass something called the Reciprocal Trade Agreement Act (RTAA) of 1934, which gave the president power to negotiate bilateral trade deals and cut tariffs up to 50 percent. This was hardly “free trade,” but it was the beginning of removing control of the tariff from Congress and empowering the executive office to push for a more integrated global economy.

Roosevelt eased any concern among workers by offering them protection of their own in the form of unemployment insurance, Social Security and, most important, the right to unionize. Knowing that opening trade created winners and losers, Roosevelt put in place a social welfare infrastructure to protect workers from the vagaries of a more open trade policy. In the process, he created a new, motivated and organized constituency for the Democratic Party: “labor.”

Many employers balked at the empowerment of unions, but a surprising number were interested in exporting their products in the international markets that would come with lower tariffs. It was an easy trade-off for them, accepting the reality of unions for the promise of trade expansion. Even the National Association of Manufacturers, which staunchly resisted the New Deal, offered quiet support for the RTAA.