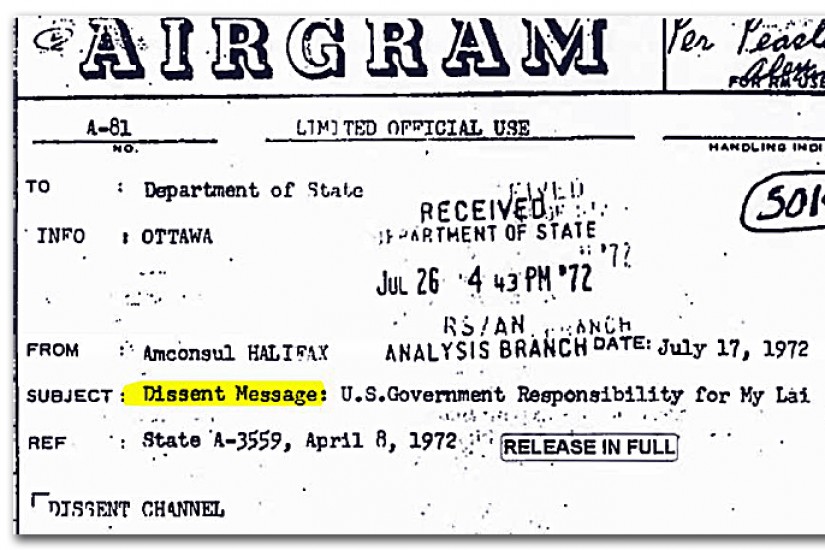 A US Foreign Service officer warned that “blatantly illegal” Congressional requests, including the use of a diplomatic pouch to smuggle gemstones and utilizing embassy employees for the “soliciting of female companionship,” were harming “the personal integrity of employees of the Department of State,” according to a Dissent Channel cable newly released to the National Security Archive after a Freedom of Information Act lawsuit.

This 1974 cable from the US Embassy in Tegucigalpa, Honduras, one of the earliest sent via the Dissent Channel, is one of dozens of messages, together with responses by the State Department’s Policy Planning Staff, posted today by the National Security Archive. Cables sent via the Dissent Channel are formal critiques of US policy by employees of the State Department. State responded to the Tegucigalpla dissent by stating that “current guidance...regarding Congressional travel is adequate.”

The topics covered in these formal cables vary widely, from moral concerns over embassies soliciting female companionship for US Congressmen, to calls for the US to act to stop “genocide,” to warnings of errors in intelligence reporting from the Vietnam War, to recommended changes in grand strategy towards the Soviet Union and China. Among the dissents and responses posted today by the Archive are: