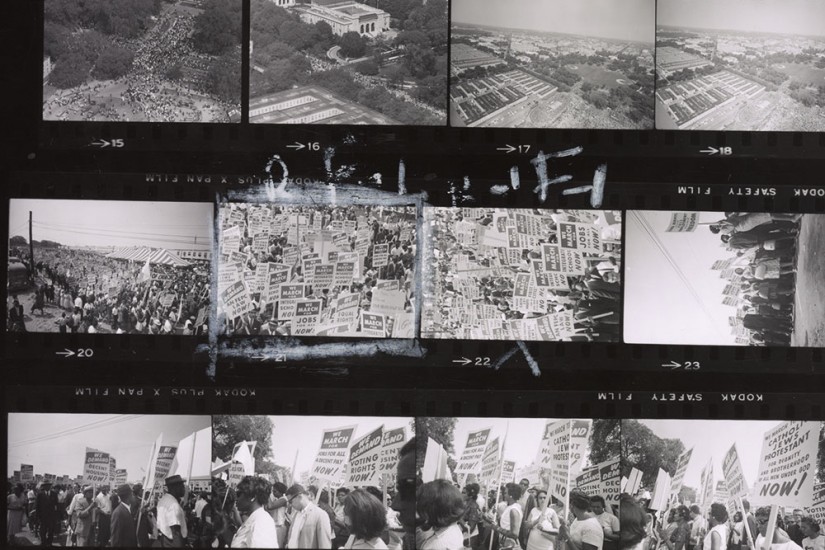 Many of the most iconic images of the era were taken by photographers working for the Student Nonviolent Coordinating Committee (SNCC), though other organizations, like the Congress of Racial Equality (CORE), also utilized photographers as part of their mission to eradicate racial inequality. As Leslie Kelen points out in the 2011 book This Light of Ours about photographers of the civil-rights era, individuals documenting the movement “did not then and do not now see themselves primarily as photographers but as ‘activists’ or ‘organizers’ with cameras.” Kelen writes that SNCC “was uniquely farsighted in its usage of photographers and photographs. Soon after its 1960 founding in Raleigh, North Carolina, this student-led organization invited photographers to be an integral part of their communications effort.” For most of these photographers, involvement with various social-justice causes has continued throughout their lives.

Bob Adelman, a photographer who worked for CORE, SNCC, and the NAACP, remembers hearing Dr. Martin Luther King, Jr., speaking to a photographer who attempted to intervene in an attack on a protester. “‘We have plenty of demonstrators,’ Doc said. ‘We need photographers.'” Adelman’s first gig was photographing sit-ins and freedom rides on Route 40 as a CORE volunteer, and he was compensated $5 per photo for any usable pictures. In the 1960s, photographs like Adelman’s helped show the injustices of segregation to a wider world that didn’t experience them on a daily basis. “People found it completely unacceptable to see others being hosed or beaten just because they had black skin,” says Adelman. “The photographs were a systematic revelation of the nature of segregation.

“In addition, my photographs were used for fund-raising, since the movement always needed money,” Adelman adds. “Photographs were also used in court cases and in congressional investigations. The Kerner Commission [a group that investigated the 1967 race riots] published a report using these photographs, and they’re now extensively used in school books and history books. They’re a document of the original sin of American life—which was slavery, segregation, and racism.”