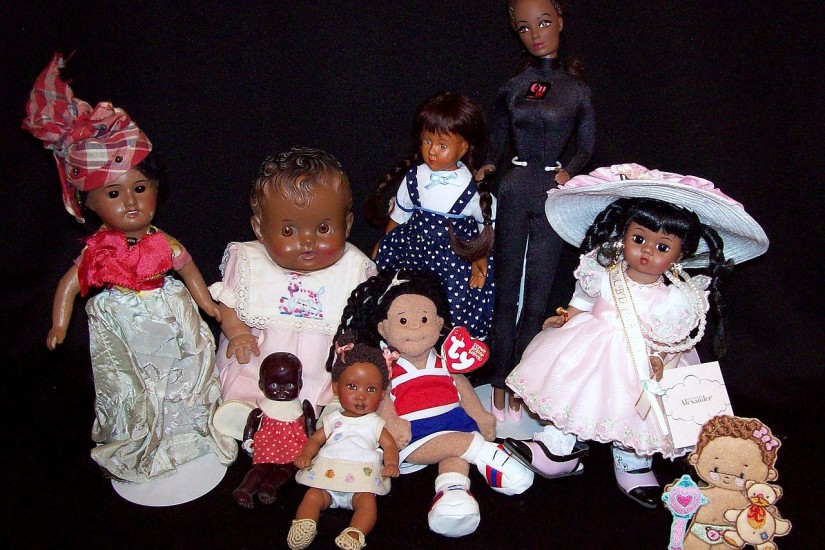 The objects featuring racist caricatures that we now call “blackamore” or  “black Americana” grew out of post-Civil War black-face minstrel shows where African Americans were depicted as watermelon-chomping simpletons with exaggerated features like googly eyes and big red-lipped grins. These caricatures carried over to children’s books like the British “Golliwogg” series featuring black-face humanoids, which were also made into rag dolls.

The matronly Mammies or Aunt Jemimas, the passive Uncle Tom, the aggressive Savage Brute, the sexually available Jezebel, the nagging Sapphire, and pickaninny children like Little Black Sambo and Topsy were all stereotypical characters that appeared as composition, celluloid, and rubber dolls in the early 20th century. Effanbee and Horsman, for example, made Mammies pushing baby carriages for decades. The Nancy Ann Storybook Doll Company made characters from Uncle Tom’s Cabin, while Reliable Doll Company was one of many that produced a Topsy, characterized by three knots of hair.

Minstrel caricatures were also prominent in advertising: Cream of Wheat adopted the male Rastus character in 1893, and that same year, the Aunt Jemima brand of pancake mix was trademarked. For some poor black families in 1895, the paper dolls printed inside the pancake-mix cardboard box, featuring Aunt Jemima and her whole family, were the only black dolls they could afford.

But even in the 1910s, early civil rights activists like Marcus Garvey and R.H. Boyd were pushing back against these stereotypes, Britt says. Boyd started his National Negro Doll Company in 1911, importing elegant black porcelain dolls from European dollmakers and selling them in the United States before his firm went out of business in 1915. Between 1919 and 1922, Garvey launched his Black Star Line, a steamship company that helped found several other black-owned businesses, including a black doll manufacturer.

Part of the reason that Boyd’s company failed might have been that most black people didn’t have the money for fancy china dolls. But perhaps black families wouldn’t have wanted them. While Pat Hatch and Roben Campbell have discovered plenty of soft-cloth folk art black dolls made from the 1870s to the 1930s, Garrett knows that during that time that some black parents handmade their children white dolls instead.

“Because of the false belief that anything white was better than anything black, some early dolls that black parents and children made from household items were often in the image of white people,” Garrett says.