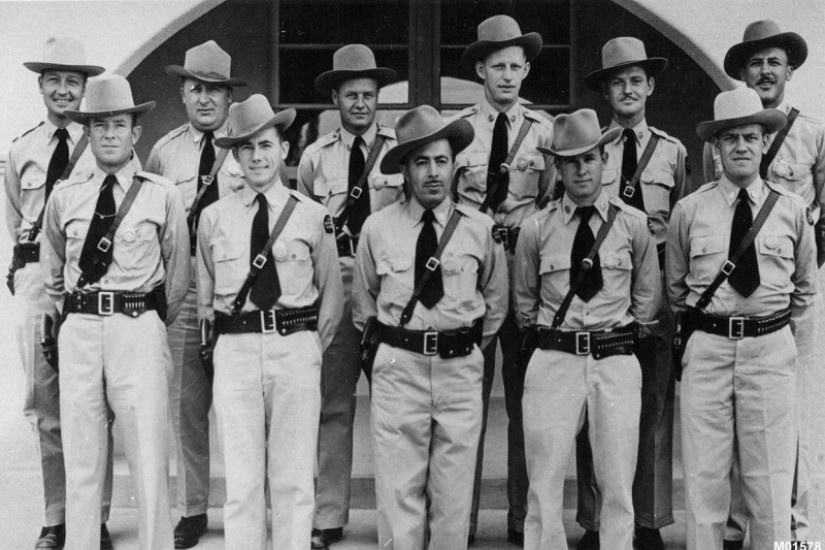 "Years later after we had out detention camp at McAllen we had a fleet of small school buses built on Ford truck chassis. The procurement officer for the department at that time was a man named Anthony. He?d purchased these little buses which were dubbed ?Anthony Ants? by Mr. Rawls. They kind of looked like a bunch of ants as all loaded with aliens they would file out of the camp in convoy en route to Zapata. The purpose of their going to Zapata was to VR aliens across the river at that point which was real isolated on both sides of the river. The little village on the Mexican side was a good many miles seems like it was bout 15 or maybe 20 miles north of the highway between Nuevo Laredo and Reynosa. There was no public transportation there so the aliens had to walk at least to that road and maybe farther to get away from that village. There was no incentive for them to return en masse at Zapata because there were no jobs on the American side in that area. It was tough traveling too to get back to the Valley from Zapata.

It seems like an inhumane way of dealing with these people but it was not nearly as bad as it would appear. Back at that time most of the aliens we were catching (farm workers) were from interior towns ranches and farms and they had walked all the way from their homes to the border and from the border to wherever they were going in the Valley. For that matter they would go on north always just walking. They walked long distances and really they did it pretty fast and without ever appearing to hurry. They traveled single file and walked along the edge of highways or roads along railroads trails or even across open country and they just kept moving. It was surprising how far they would go in a day. To illustrate their ability to travel I will relate a story of my dealings with a young wet at Edinburg. I caught him early one morning along with some others; in fact we had a pretty good group before to late in the morning. It was our practice at Edinburg to go out early each day as I mentioned and catch all the aliens we could or a least as many as we could handle then take them into the office which at that time was a room next to the JP court in the basement of the old courthouse. Once we got them in there we would process them and then haul them on to Mexico or take them wherever they had to be disposed of. Except on rare occasions when the court was in session we would use that little courtroom to hold all of the aliens and we would just type the required apprehension reports right there in the courtroom.

As soon as we had a couple of carloads ready some of us started taking loads to Hidalgo for VR while other officers continued processing the aliens we had apprehended. Trips were made as long as we still had aliens to return to Mexico. There was no lunch break; no nothing. Mr. Kelly did not want anybody to stop until all the aliens were disposed of. He quit at noon and went home to eat and did not come back unless it would be that night sometimes but he did not come back for the rest of the afternoon?s processing. This particular wet I mentioned was in the load I took to Hidalgo the first load that day. Then a little later I was taking another carload and I saw that same wet on this side in Hidalgo so I stopped and picked him up again and brought him on back to Ediunburg and put him in the bunch to be processed. Later he was taken to Mexico again. Well a third time that day I encountered him again on this side in Hidalgo and processed and VR?d him again. That evening about 6 or 7 I was going to a dairy that is on the edge of Edinburg to buy some milk and I saw this same wet walking up the road into town. I was in my personal car then and I pulled up to him and stopped. He started over to the car I know expecting to be offered a job or a ride and when he looked in and recognized me he just kind of hung his head looked dejected opened the door and got in. That time I did not take him back; I just put him in jail overnight and figured we both had seen enough of the other for one day. That case is not typical of the number of times you catch a particular alien in a day but it is typical of their determination to immediately return after being sent back to Mexico. They were determined to come over here and be here and simple VR to Mexico and the long walk back was absolutely no deterrent. Neither was Federal Court much of a deterrent."