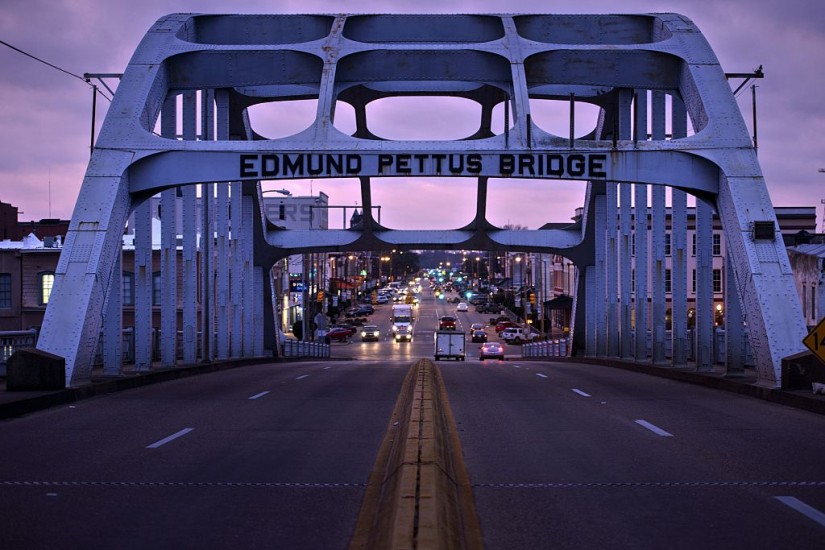 A dusk view of the Edmund Pettus Bridge where the famed Selma to Montgomery March of 1965 began.
Brendan Smialowski/Getty Images

What history of the civil-rights movement should we tell today? How do the political gains of an era marked by hope and possibility look from our contemporary vantage point? Our conditions, after all, seem to call for pessimism. Like Ronald Reagan before him, Donald Trump has pandered to law enforcement. Like Bill Clinton, he has justified attacks on the American welfare state that disproportionately hurt people of color. Like Richard Nixon, he rode into the White House with a call for law and order, and he and his cabinet hope to dismantle the few anti-racist protections left intact. The absurdity of reliving these previous administrations today, as if we were living in 1981, or 1993, or 1969, would be satirical if it were not so plausible. Just over a year into Trump’s presidency, the fragile state of racial justice in America can only produce a deep sense of despair.

While researched and written before Trump’s election, Karlyn Forner’s Why the Vote Wasn’t Enough for Selma, a history of the Alabama city and surrounding Dallas County, seems to appropriately reflect the tenor of our time. Her book begins with the economic distress faced by many African-American residents of Selma, who today constitute almost 80 percent of the city’s population (approximately 19,000 people). According to the Census Bureau’s 2016 estimates, the median household income in Selma is $23,000; 41 percent of its population lives below the poverty line; and only 17 percent hold bachelor’s degrees. This bleak portrait is a far cry from the popular image of Selma—the site of the heroic march on the Edmund Pettus Bridge, a major turning point in the fight for the vote—as a symbol of the civil-rights movement’s triumphs. How could the town whose name became a rallying cry for the federal protection of black people now be home to such intense poverty?

To answer that question, Forner goes as far back as 1901 to offer a long view of the civil-rights movement and to examine both its achievements and the white backlash that counteracted its gains. She maps the transformation of black tenant farmers into low-wage industrial workers and the unemployed, and tracks how local white government officials and businessmen adapted to these changes in order to find new means of profiting from African-American labor while reasserting the South’s racial hierarchies.