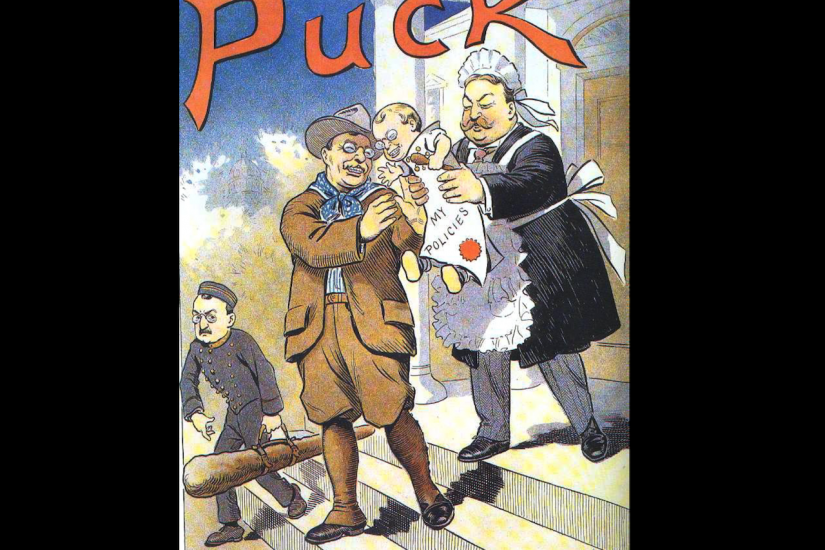 A 1909 cover of Puck Magazine depicts Theodore Roosevelt (dressed as a cowboy) entrusting his policies to Taft when the latter took office.
Samuel D. Ehrhart/Puck Magazine
…

Nevertheless, Taft set the GOP down a path of supporting free trade and balanced budgets that continued, with only minor interruption, for nearly a hundred years. His refusal to use executive orders to circumvent Congress’s legislative authority on tariffs—as well as other matters—led to moderate policies with broad bipartisan support that were sustained by the next administration, even after the Democrats won the presidency and control of Congress.

Now, Trump has rekindled the protectionist flames that Taft tried to dampen. Where Taft wanted lower tariffs, Trump wants higher ones. Where Taft turned a budget deficit into a surplus—by pairing tariff reductions with an increase in the corporate tax rate—Trump has staked his presidency on budget-busting corporate tax cuts. And where Taft supported international free-trade agreements—notably, a free-trade pact with Canada he persuaded Congress to pass—Trump has threatened to pull out of NAFTA and the Paris Agreement.

But what most clearly distinguishes Taft from Trump is Taft’s respect for constitutional constraints on executive power. Trump, like Theodore Roosevelt, has assailed individual judges by name. But Taft, the only president who went on to serve as a chief justice of the Supreme Court, was a lifelong defender of judicial independence. Where Trump has used executive orders to impose his policies by fiat, Taft denounced executive orders as unconstitutional end runs around Congress. And where Trump has made populist appeals based on the idea that he “alone can fix” America, Taft believed that populist appeals would encourage demagoguery and mob rule.

In the end, Taft’s constitutional restraint helped solidify his legacy as our most judicial president and most presidential chief justice. “The thing which impresses me most is not the power I have to exercise under the Constitution,” Taft said in a 1909 address, “but the limitations and restrictions to which I am subject under that instrument.”