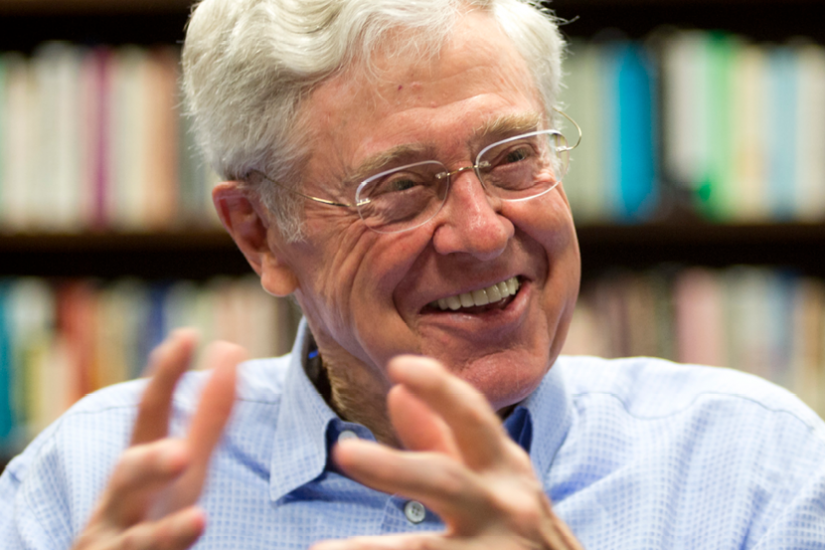 A new report from activist group UnKoch My Campus shows that Charles Koch’s ties to white supremacy have persisted throughout his adult life. The report details an array of instances where Koch has funded neo-Confederate scholars—a largely unnoticed aspect of the Koch Industries CEO’s ambitious project of funding higher education. Most alarming is a collaboration between Florida Atlantic University, the Charles Koch Foundation, and a major private-prison company, which is led by a professor who was a member of the research arm of a white-nationalist hate group.

While raking in corporate profits as the head of the family’s oil-refining business in the mid-1960s, Charles Koch and his top tactician, Richard Fink, developed a “Structure of Social Change,” which they would deploy to pull America as far to the right on taxes and regulations as they could. Koch, a libertarian, had resigned from the John Birch Society after opposing its position on the Vietnam War, and created a regressive sphere of influence. The first step in this strategy was funding higher education, because, as he said at a 1974 gathering of the Institute for Humane Studies, now a George Mason University center that he finances and directs, “educational programs are superior to political action, and support of talented free-market scholars is preferable to mass advertising.”

Koch and his family foundations have donated hundreds of millions of dollars to colleges and universities around the United States. In 2013, the Charles Koch Foundation began donating to Florida Atlantic University, offering $5,000 that year. By 2016, the annual donation had risen to $32,000.

Marshall DeRosa, who runs a prison-education program with financial backing from the Koch Foundation, is a Florida Atlantic University political-science professor who has written extensively on the Confederacy. He also has ties to its modern remnants.

From 2000 until at least 2009, according to archives web pages, DeRosa was a “faculty member” at the League of the South Institute, the “educational arm of the Southern independence movement” where “the South’s finest unreconstructed scholars” taught summer institutes and seminars. The LOS Institute acts as the charitable nonprofit of the League of the South, which the Southern Poverty Law Center considers a neo-Confederate hate group, and supports a second Southern secession in order to form a nation ruled by “Anglo-Celtic” people.