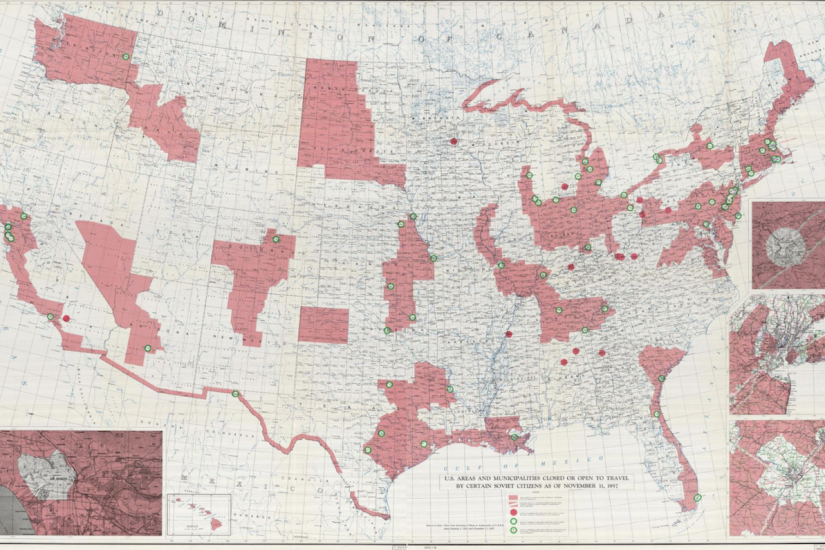 Areas marked in red were off limits to Soviets in the U.S. as of November 11, 1957.
Library of Congress

From election interference to alleged nerve poison attacks, Russian meddling has flung the world into a haze of paranoia. At the height of the Cold War, similar mistrust of the Soviet Union led the U.S. to make an extraordinary map showing places where Russian visitors could not legally go.

During the Cold War, fears of Russian meddling prompted the United States government to block Soviet visitors from accessing entire swaths of the country. As of November 11, 1957, when the above map was made, anyone traveling to the United States on a Soviet passport was forbidden from visiting Long Island, much of Northern California, and nearly the entire east coast of Florida. In all, about a third of the country was off limits to citizens of the Soviet Union and Eastern Bloc countries.

Red patches on the map indicate areas that were inaccessible to Soviet travelers. Green circles within the red areas mark cities they were allowed to visit (most major cities were fair game). In some cases, specific roads were designated for travel through otherwise closed areas. Conversely, red circles indicate banned sites within otherwise open areas, mostly in the Southern states and the Midwest.

The map raises interesting questions: Why was Memphis banned but Nashville not? Why was the entire state of Washington off limits? It’s possible there was a rationale for some of the banned areas, but others were probably chosen more arbitrarily in the attempt to keep a significant portion of the country inaccessible to Soviet visitors, just as they did for travelers from the U.S., says Ryan Moore, a cartographic specialist in the Geography and Map Division of the Library of Congress. “We simply did not trust one another,” he says.

Military bases and factories were probably areas of special concern. A State Department memo published in 1955 lists objects that Soviet visitors were forbidden to sketch or photograph; it includes military installations, fuel storage depots, seaports, power plants, factories, and communications facilities. They were also forbidden from taking photos from airplanes on flights over the U.S.

There were likely other considerations, too. “I think we wished to minimize them seeing Jim Crow conditions and other parts of our society that they could exploit for propaganda,” Moore says. “After all, the Cold War was [an] ideological war between East and West. Any shortcoming on one side was seized upon by the other.”