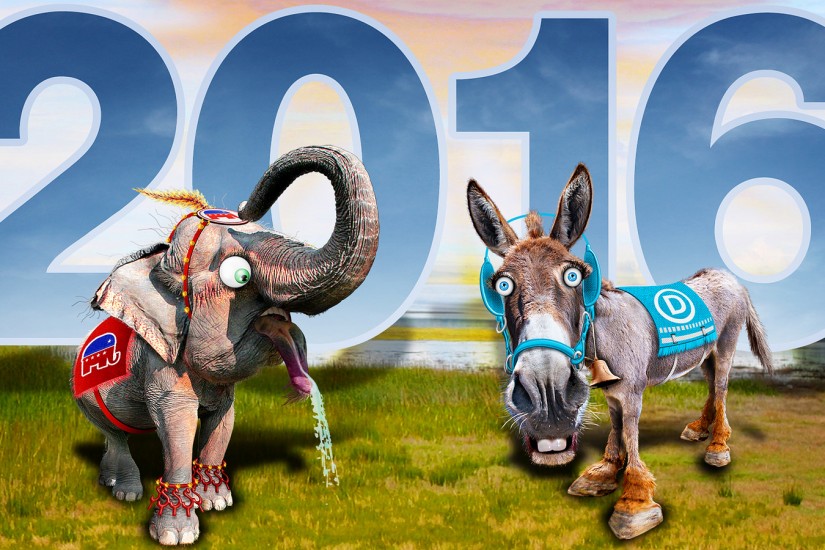 The mascots of the Republican and Democratic parties are depicted in distress in this cartoon (2016).
flickr.com/donkeyhotey

The internal divisions within our political parties are deeper than they’ve been in at least two decades. The Democrats are divided between the Hillary types and the Bernie camp. The Republicans between Trump and Never Trump. This is beginning to harken back to the old days, when our parties were amalgams of factions that were sometimes harshly at odds with each other—when the Democrats were the party of black people and Southern segregationists, and the Republicans the party of Wall Street and patrician Yankee liberals.

The United States has had three different “party systems” in its history. First were the Federalists vs. the Democratic-Republicans, which lasted from the early 1790s to 1815. Second came the Whigs vs. the Democrats, which ran from the 1830s to the mid-1850s. Third—the Democrats and Republicans, from the 1850s to now. That’s an awfully durable competition. But nowhere is it written that these things are fated to last forever.

Are we beginning to see signs that the parties might one day split? Are trends like heightened polarization and our inexorable movement toward a more parliamentary politics hastening such a day? And if that day arrives, what might replace our two parties?

With these questions in mind, we asked four distinguished thinkers who are well-versed on parties and their history to bat the issue around. The conversation took place just before Christmas 2017. Democracy editor Michael Tomasky moderated, with managing editor Jack Meserve pitching in.