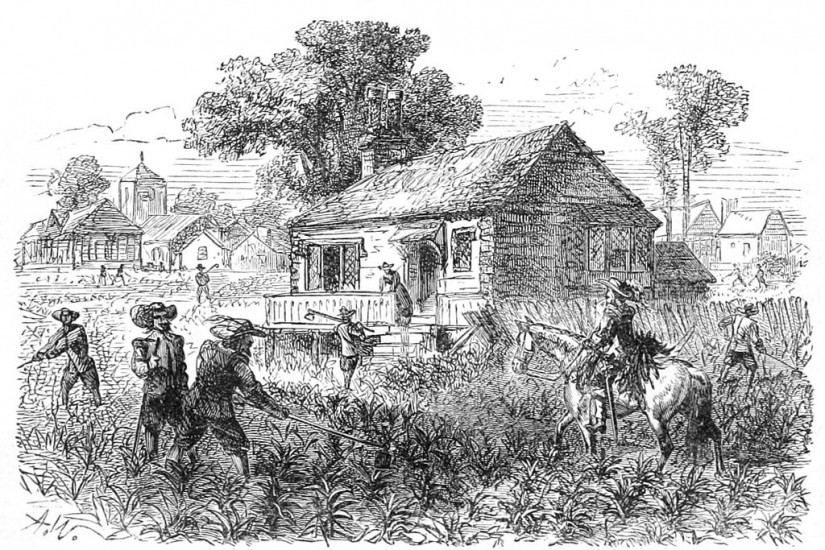 An 1878 depiction of tobacco cultivation at Jamestown, ca. 1615.
Wikimedia Commons
…

It’s a lesson as old as European settlement of the present-day United States: Treating migrant workers as property for the benefit of others leads to terrible consequences. But judging from a recent immigration-reform proposal, the country hasn’t entirely learned that lesson. In a Politico piece originally titled, “What If You Could Get Your Own Immigrant?”—a headline that provoked such anger it was quickly changed—Eric Posner, a professor at the University of Chicago’s Law School, and Glen Weyl, an economist at Microsoft Research New England, described a plan that amounts to reintroducing a form of bonded immigrant labor to the United States. Their idea, in essence, is to give every American citizen the right to “sponsor” an immigrant, put that person to work, and then take a portion of his or her wages.

If these two scholars at elite institutions were aware of their plan’s historical precedent, they gave no indication of it. But it’s clear from American history that such a proposal would be a disaster not only for immigrants, but for American democracy. Once set in motion, any policy that creates conditions for exploitative labor practices is likely only to encourage more exploitation.

The history of how indentured servitude transformed into racialized chattel slavery in America provides a particularly vivid example of this vicious cycle. In theory, colonial Virginia’s intense labor scarcity ought to have meant favorable terms for migrating workers. But as Jane Dickenson learned, the men who governed the colonies changed market dynamics by imposing harsh laws that allowed them to control and capture laborers in new ways. Whereas contracts of indenture for agricultural workers in England typically ran to only one year, in America they stretched out to seven. And colonial authorities routinely punished servants who tried to escape—or simply displeased their masters—with whippings, split tongues, sliced ears, and extra years of service. As the late American historian Edmund Morgan put it, even before slavery took root, Virginia’s masters were moving “toward a system of labor that treated men as things.”

This still wasn’t enough. As free subjects of the English crown, servants who managed to outlive their indentures could eventually obtain property and some measure of political clout. As former servants increased in number, they indeed began to challenge their former masters’ authority, most famously in Bacon’s Rebellion of 1676. Enslaved Africans provided a dual solution to this problem. First, the importation of already enslaved laborers allowed masters to more easily treat servitude as a lifetime, hereditary status, preventing the growth of a troublesome population of the formerly unfree. Second, it made whiteness the mark of freedom, ensuring that “ordinary” English settlers identified with their social betters instead of making common cause with the new arrivals.