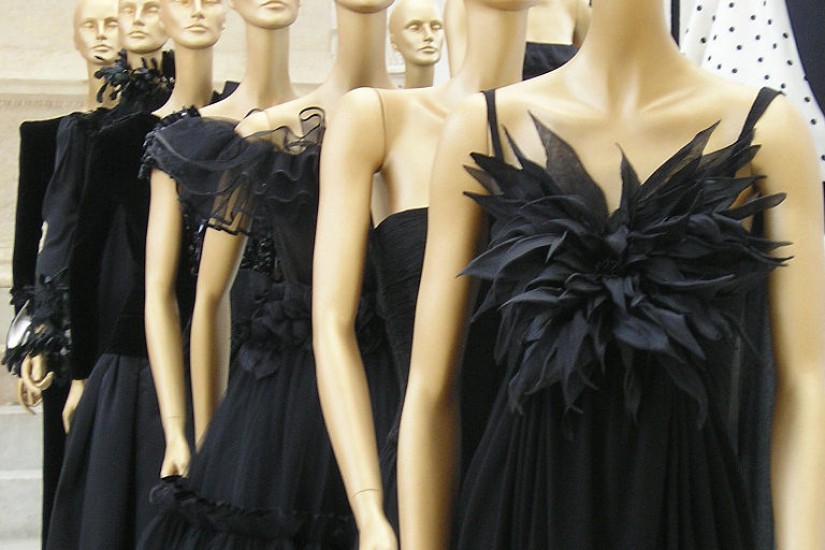 A collection of black dresses by Valentino at the exhibition "Valentino a Roma" at Museo Ara Pacis in Rome (2007).
Loquax/Wikimedia
…

The LBD also finds its origins among the poor. Before the 19th century, domestic servants wore whatever they could—homemade dresses, often, but also their employers’ hand-me-downs. But in the 1860s, the British upper classes required their maids to wear a common uniform: a white mobcap, an apron, and a simple black dress. Soon after, wealthy American and French families followed suit.

Relationships between upper-class women and their servants had changed, becoming “less intimate and more authoritarian,” as the sociologist Diana Crane puts it. At this time, servants ceased to be “the help,” a somewhat collegial characterization, and became known as “domestics.” And domestics wearing upper-class castoffs, especially young and pretty ones, led to embarrassing mix-ups. A caller mistaking the maid for the mistress of the house raised uncomfortable questions about recently erected class barriers.

Cassell’s Household Guide, which billed itself as an encyclopedia of domestic and social economy, summed up the problem like this, circa 1880: “As a general rule, ladies do not like to see their maids dressed in the clothes they themselves have worn—the difference in the social scale of mistress and maid renders this unpleasing.”

But Cassell’s made one exception: “a black or a dark-colored silk.” Previously, a simple black dress meant a wealthy woman was “dressing down.” But by the 19th century, the black dress had become a staple of the lower and middle classes. It was the perfect hand-me-down for the help.

There was a time when black signified wealth. It was favored by 15th-century Spanish aristocrats and wealthy Dutch merchants. Later, Baldassare Castiglione’s 1528 The Book of the Courtieradvised others to follow their lead, to appear above the petty fads of commoners. Black clothing conveyed plainness and piety, for one thing. But it was also incredibly expensive to produce, requiring vast quantities of imported “oak apples”—a bulbous growth left behind on oak leaves from insect egg sacs. By the early 19th century, a newer dye made from logwood and ferrous sulfate made the color cheap to produce. In 1863, an even cheaper synthetic aniline black dye was developed.

By the 1880s, most awkward maid-or-mistress mix-ups had been eliminated thanks to the trusty black dress. But another sort of working-class woman now had the opportunity to dress above her station. Rapid industrialization gave consumers more disposable income, and they wanted places to spend it.