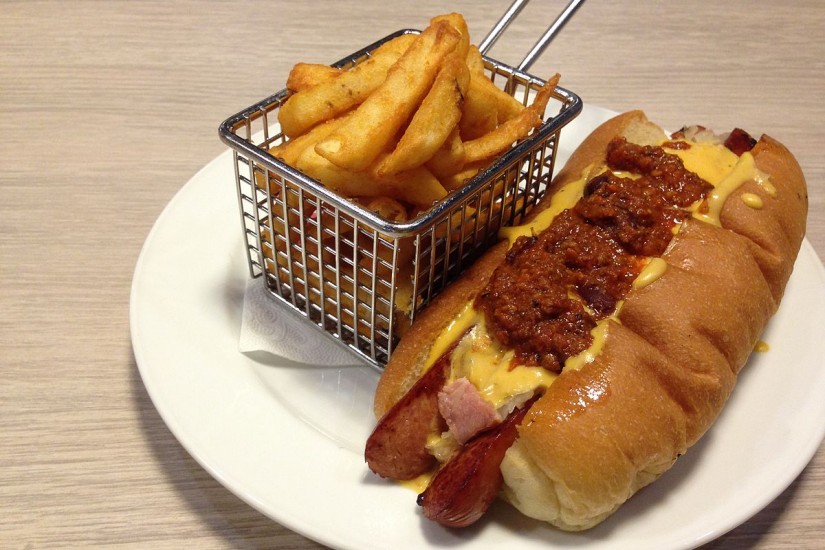 The chili that adorns today’s chili dog is much closer to the meat sauces of Greece and Macedonia—marking the appearance of yet another marginalized ethnic group in the story of the modern chili dog.

If you are from Detroit, or Cincinnati, or if you have eaten hot dogs at roadside stands in Pennsylvania or upstate New York, you have had something like a coney. Several coney islands, a type of restaurant, in Michigan claim to have invented the coney—a hot dog dressed in a meat sauce, striped with yellow mustard and punctuated with diced onions. There’s Todoroff’s in Jackson, circa 1914. The brothers Bill and Gust Keros at American and Lafayette Coney Islands in Detroit say they had one by the 1910s. Down in Ohio, Thomas Kiradjieff claimed to have invented the Cincinnati cheese-covered coney in 1922. In each case, the meat sauce is laced with Greek seasonings—cinnamon, oregano, even chocolate. This is not Texas-style chili, but in most parts of the country, it is probably what blankets a chili dog.

There are countless coney-style hot dog variations that dot the map, especially around the Great Lakes, New England, and Atlantic regions. (For a helpful map, check out Hawk Krall’s on the website Serious Eats.) Even more convoluted is the nomenclature of each of these coney-esque hot dogs: the Michigans of Plattsburgh, New York; the “New York system” of Rhode Island; the universally misspelled “Texas weiners” of New Jersey and Pennsylvania.

The name coney comes from Coney Island, though it’s thought that few Greek or Balkan immigrants had seen Brooklyn’s Coney Island. Instead, they took the distinctly American name for their Midwestern coney restaurants, possibly to seem less foreign. After all, the first recipes for coney sauce called for beef hearts. In order to make the offal and seasonings of their homelands less exotic, they draped the sauce over the familiar hot dog.

Out in Los Angeles, Art Elkind claims to have invented the chili dog in 1939. Entire generations of Southern Californians will name Pink’s as the formative chili dog. Regardless of who invented the chili dog, it was here to stay. By the time the fast food drive-ins and car culture of the 1950s and 1960s took hold, the chili dog was a menu fixture at local stands and highway Dairy Queens. A whole generation of Americans could eat chili dogs in their cars—carefully, and with lots of extra napkins.