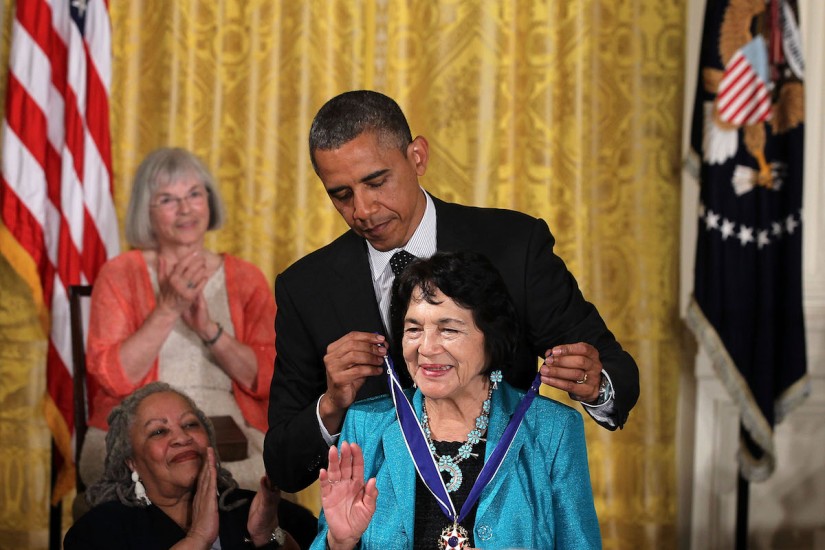 The film covers a little bit of the moment where you see the link between what you’re working on with the farmworkers and the feminist movement of the time, and the question of whether there was room in the feminism of the 1960s for the women for whom you advocated. Were there any particular moments that made you feel excluded or included?

I have never felt excluded. My mother was a feminist. She was a business woman. She was a dominant force in our family. But when I went to work with the farmworker’s union as an organizer, I kind of had to subdue my feminist tendencies in that respect. Women of color have always been in the forefront, of the civil rights movement and of the labor movement, but when you think about the feminist movement, it was originally organized by middle-class women. That’s why a lot of people have that narrative that feminism is for white women. Lots has been made out of that, but I think sometimes that’s not really fair. That’s the way that it was. But I don’t think the feminist movement was meant to exclude any people of color.

When TIME selected the people speaking out about sexual harassment and assault to be 2017’s Person of the Year, there was a line in the story about farmworkers marching in solidarity with Hollywood actors. When did you first become aware of sexual harassment as an issue affecting farmworkers?

Farmworker women have always been subjected to sexual harassment and rape. The women would have to have sex with the foremen to make sure that they kept their jobs. It was their form of job security to have children by these guys. The thing is, a lot of time you have farmworkers who work as families, so there’s a lot of fear, because if the woman reports sexual harassment from the foreman, then maybe the whole family will get fired. There’s also a threat of violence because her partner could feel that she was responsible for the come-ons, and she could then face violence at home. Also they work out in the fields and they’re kind of isolated. In California, because of the work we did with the farmworkers’ union, the Agricultural Labor Relations Board has included training on sexual harassment as part of the work that they do.