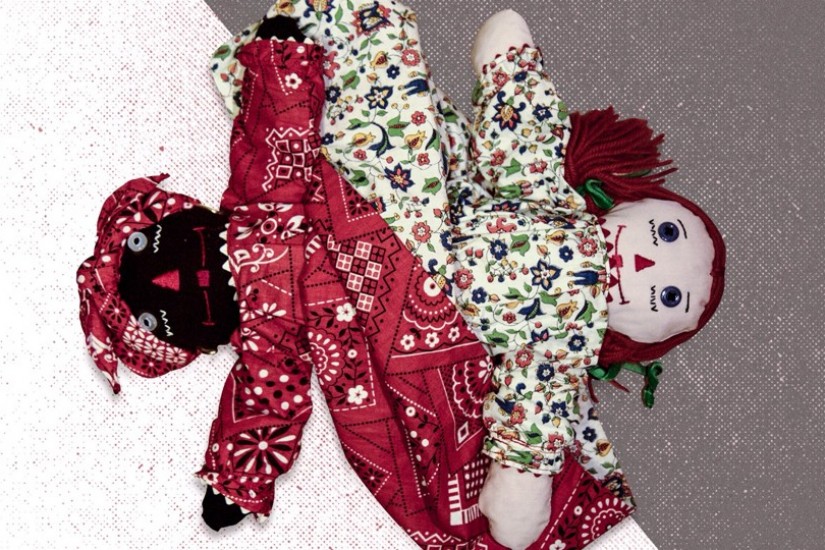 The doll is two-headed and two-bodied—one black body and one white, conjoined at the lower waist where the hips and legs would ordinarily be. The lining of one's dress is the outside of the other’s, so that the skirt flips over to conceal one body when the other is upright. Two dolls in one, yet only one can be played with at a time.

The topsy-turvy doll, as it’s known, most likely originated in American plantation nurseries of the early 19th century. By the mid-20th century, they’d grown so popular that they were mass-manufactured and widely available in department stores across the country, but today, they’re found mostly in museums, private collections, and contemporary art. In recent years, the dolls have seen a renewed interest from collectors and scholars alike, largely motivated by the ongoing question that surrounds their use: What were they supposed to symbolize?

It’s unclear whether topsy-turvy dolls were first created to reinforce racial and sexual power dynamics or if they were something more subversive. Either way, the dolls have since the beginning been reinterpreted and appropriated to suit the use of their makers, the children who played with them, and the people who felt they were worth preserving—their purpose was always context-dependent, a moving mirror of racial womanhood.

The dolls, like most toys, were much more than neutral props for make-believe; they were instructional, too. As the game designer and “fun theorist” Bernie DeKoven wrote in his book Interplay, “Every game that a child plays is somehow connected with learning about people.” This process can be incidental or deliberate, but it’s usually a bit of both. A child’s sense of fairness, and of his or her place in society, is often shaped by the playtime lessons of who makes the rules and who follows them.