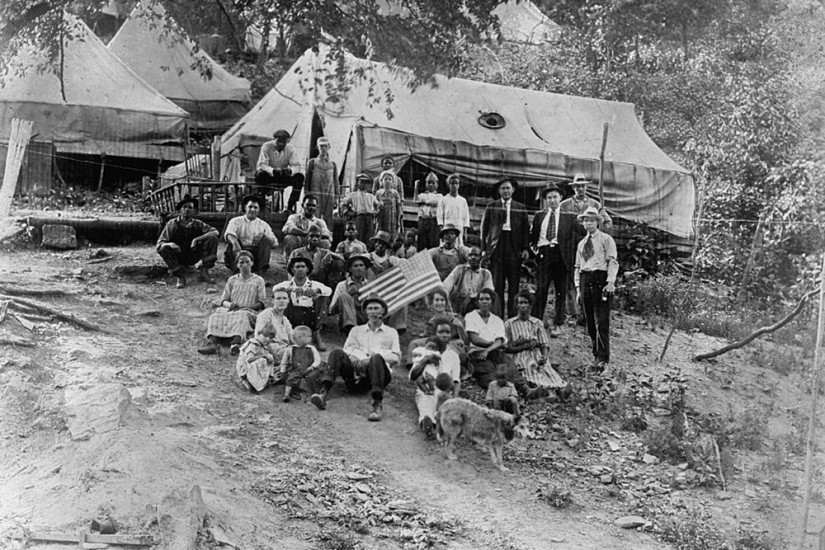 Group of striking union miners and the families living in tents, 1922.
Library of Congress
…

Long before resistance was a hashtag, it was a bandanna. The red bandanna has been a sartorial thread in West Virginia history, dating back to at least 1877. That year railroad workers in Martinsburg, protesting a 10 percent pay cut, shut down the railroads and sparked the first nationwide strike in American history. Some of these workers began wearing red bandannas around their necks as a symbol of solidarity.

Coal miners adopted the bandanna during the West Virginia Mine Wars, beginning with a major strike on Paint Creek and Cabin Creek and continuing into 1913. Dozens of lives were lost during that strike, as miners and their families turned to violent revolt after they were evicted from company homes and forced to live in tent colonies. At issue was union recognition; the right to be paid in American currency, not company scrip; and the abolition of the local industrial police state known as the Mine Guard System. These same issues were in play in 1921, when the Mine Wars reached its climax at the Battle of Blair Mountain, often described as the largest armed uprising in America since the Civil War. For nearly a week, approximately ten thousand miners assaulted the entrenched defensive positions of some two thousand mine guards and state police along a ten-mile front. Only intervention from federal troops halted the bloodshed.

During the 1921 uprising, so many miners wore bandannas that they were called the “Redneck Army.” Throughout the rest of the century, miners would continue to wear bandannas during strikes. In recent years, environmentalists and historic preservationists in the state have used the red bandanna as a symbol of protest, most notably in their activism against the coal industry and during the 2011 protest march to save Blair Mountain from destruction by mountaintop-removal coal mining.

In 2018 teachers continued the tradition as they donned bandannas and packed into the Capitol complex for the duration of the strike. The term redneck is usually associated with rural and Appalachian stereotypes, but rednecks and red bandannas are in fact symbols of worker solidarity and resistance to abusive corporate power and corrupt politics.