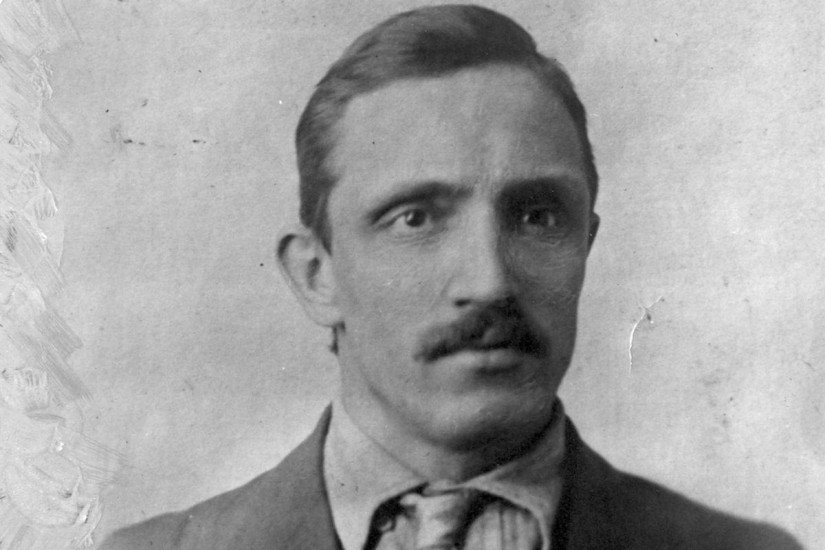 A photo of Robert Prager that was stolen his home following his lynching.
St. Louis Post-Dispatch

Today marks the centennial of the lynching of Robert Prager, a German immigrant murdered in Collinsville, Illinois, by a drunken mob who believed, falsely, that he was a German spy. Prager’s lynching was the high-water mark of the anti-immigrant and anti-German hysteria that gripped the nation during World War I. A century later, Prager’s brief life and tragic death remind us of the complex hatreds unleashed by World War I. As the nation commemorates the Great War’s achievements during this year’s centennial, the war’s dark domestic consequences deserve remembrance as well. Prager’s lynching is a sobering reminder of how quickly the tensions of immigration, ethnicity, and nationalism can slide into mob rule and murder.

Born in Dresden in 1888, Robert Prager immigrated to the United States at age seventeen. He was a drifter, moving often in search of work. He spent a year in an Indiana prison for theft. By 1917, he was living in St. Louis, likely drawn by the city’s booming, sooty industry and large German-American population.

When the United States entered World War I in 1917, Prager sought a job in a southern Illinois coal mine. Production was expanding to meet wartime demand and wages were high. An unsubstantiated rumor spread among fellow miners that Prager was a German spy who planned to blow up the mine. Except for his German accent, there was no reason to suspect Prager of disloyalty. Yet in an atmosphere rife with labor conflict and suspicion of immigrants, even a rumor of disloyalty could spur vigilantes into action. Superpatriots forced Prager to kiss the American flag to show his loyalty, a common practice during the war. They warned him to leave town to avoid further harm. He refused. Either due to stubbornness, or a simple desire for fair treatment, or the need for a decent paycheck, Prager printed an appeal to fellow miners and posted it near the mine.

Inflamed by the German immigrant’s actions, a group of miners roused Prager from his boarding house on the evening of April 4 and ordered him to leave town. Prager agreed. But once he was out of his room, the mob draped him in an American flag and paraded him down the town’s Main Street. Such patriotic harassment was common during the war and city officials ignored it at first. As the crowd grew, police took Prager to jail for his own protection. But the flag-waving mob stormed the jail and removed Prager while police looked the other way. The mob marched Prager to the river bluff overlooking St. Louis, beating him and forcing him to sing the Star Spangled Banner repeatedly.