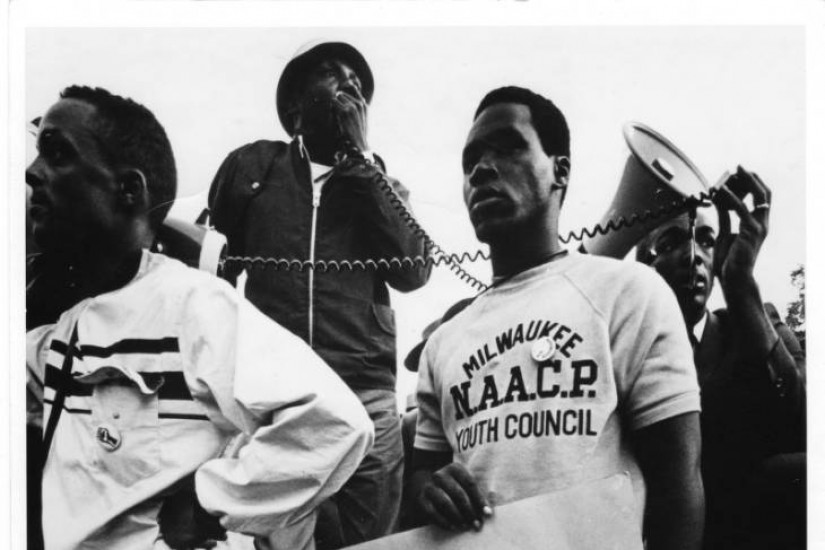 King traveled extensively and reminded crowds often that “the racial issue we confront in America is not a sectional but a national problem.” His thoughtful observations during press interviews and soaring proclamations to overflowing crowds about injustices rang true to Black Americans everywhere, including those in Milwaukee. King first visited the city in 1957, shortly after the successful conclusion of the dynamic Montgomery Bus Boycott. Speaking before a crowd of 1,200 at the invitation of the Milwaukee branch of the National Association for the Advancement of Colored People (NAACP), King challenged the crowd “to refuse to cooperate with segregation and discrimination even when the price might be jail or death.”

King’s anointment as the most visible leader and spokesperson for the rousing civil rights movement was nearly complete by the time he returned to Milwaukee in January 1964. Local alderwoman, Vel Phillips introduced King to the crowd of 6,000 and outlined the local struggle for equality. King reflected upon his experience in Birmingham waging vigorous battles against entrenched segregationist forces. The brutal repression and thuggish violence demonstrators faced — captured on film and in news photographs published worldwide — garnered significant awareness and sympathy for the movement.

King returned a third and final time in November 1965. Speaking at the University of Wisconsin-Milwaukee, he called for an end to discrimination, especially the school segregation plaguing local schools. King demanded action on employment discrimination and a minimum wage increase while nodding to the seething and dangerous conditions in inner cities. King’s stature had risen even higher since the dramatic Selma to Montgomery marches and monumental legislative victories — the Civil Rights Act of 1964 and Voting Rights Act of 1965. His legacy was all but solidified with the Southern struggle, but the landmark legislation had little impact on those suffering up North and beyond Dixie.

Cities beyond the South rarely figure into the dominant civil-rights narrative most schoolchildren learn today, but grassroots campaigns were conceived of, built by, and waged locally by local activists and ordinary citizens all across the nation. In Milwaukee, parents, religious leaders, and activists picketed burger chains and targeted employers known to discriminate. They organized school boycotts, set-up Freedom Schools, and led a massive school desegregation effort. Youth grew up active in the struggle. Milwaukee leaders and activists attended the March on Washington for Jobs and Freedom, heeded Dr. King’s ecumenical call to head to Selma, and volunteered during Freedom Summer and elsewhere in the South. Yet, many returned home to confront the injustices they knew existed in their own Northern city.

Problems facing Black Milwaukee included employment discrimination, police brutality, and segregation in education, but it was housing discrimination that proved especially pernicious. With each passing decade, tens of thousands of new Black residents found themselves pinned in the city’s largely segregated Inner Core. Blacks endured housing shortages, poor conditions, and high rents. Local activists took up the issue in 1967 in what turned out to be the city’s most tumultuous civil rights battle.