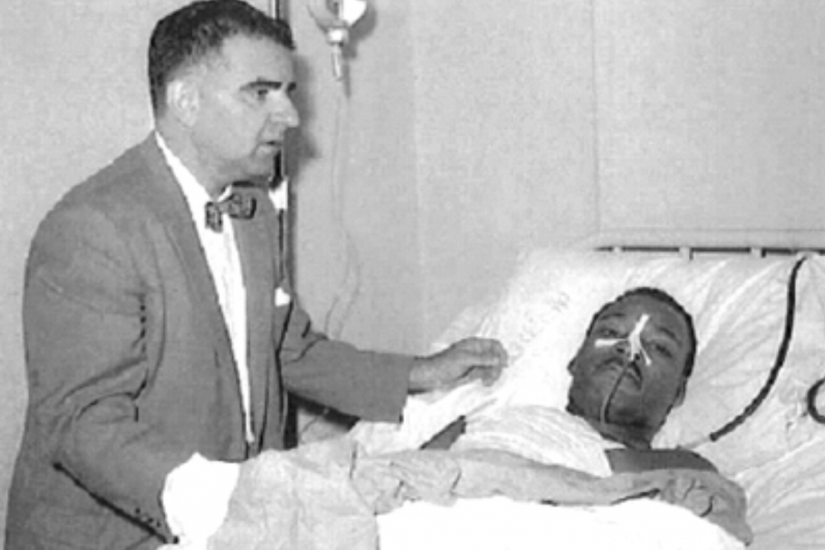 In the last speech King gave before his assassination, he recalled how he had been stabbed, and almost killed, in Harlem. The story, as King told it, goes like this: It was a Saturday afternoon, and King had been signing his first book, Stride Toward Freedom, at Blumstein’s Department Store on 125th Street. A black woman approached him where he was sitting. She asked if he was really Martin Luther King. He said yes. Then, she plunged a letter opener into his chest.

According to a New York Times article the following day, the blade was sitting so close to King’s aorta that a sneeze could have killed him. Bystanders restrained the woman, who was mentally ill. Meanwhile, King told the crowd, he “was rushed to Harlem Hospital.”

My grandfather was about to go off duty when King was brought into the Harlem Hospital emergency room on a stretcher, the letter opener still wedged into his chest. As a first-year resident specializing in pulmonary medicine at the time, my grandfather was one of the first people to examine King: He removed King’s shirt, listened to his lungs, and took an EKG. According to my grandfather’s written account, published decades later in an anthology, King himself remained very calm throughout. “If he was praying,” my grandfather wrote, “he was praying to himself.”

Soon, emergency nurses and doctors whisked King away, and a small group of surgeons—black and white—performed the two-and-a-quarter-hour operation that would save the civil-rights leader’s life.

It was September 20, 1958, and King was only 29 years old. He had not yet given his dream speech; had not yet seen the Civil Rights Act passed; had not yet led the march from Selma to Montgomery. Ten years later, King would tell the crowd in Memphis that he was “so happy” he didn’t sneeze that day.
…
View on The Atlantic
View Connections