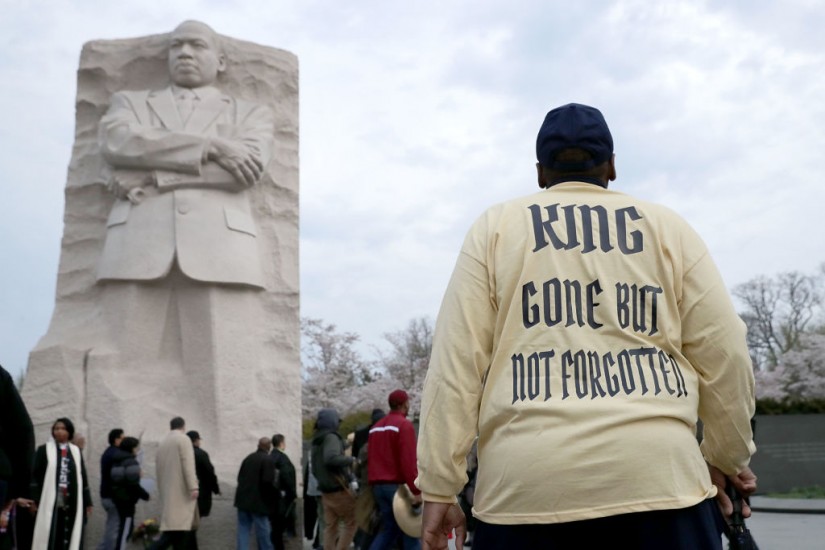 Marchers assemble by the Martin Luther King, Jr. memorial before a commemoration of the 50th anniversary of King's assassination (April 4, 2018).
Chip Somodevilla/Getty Images
…

In so doing they will wilfully and brazenly omit the fact that before his death in 1968, King was well on the way to becoming a pariah. In 1966, twice as many Americans had an unfavourable opinion of him as a favourable one. Life magazine branded his anti-Vietnam war speech at the Riverside church, delivered exactly a year before his assassination, as “demagogic slander”, and “a script for Radio Hanoi”. Just a week before he was killed, he attended a demonstration in Memphis in support of striking garbage workers. The protest turned violent and police responded with batons and teargas, shooting a 16-year-old boy dead. The press and the political class rounded on King. The New York Times said the events were “a powerful embarrassment” to him. A column in the Dallas Morning News called King “the headline-hunting high priest of nonviolent violence” whose “road show” in Memphis was “like a torchbearer sprinting into a powder-house”. The Providence Sunday Journal called him “reckless and irresponsible”. He was back in Memphis supporting the strike when he was killed.

This was the last time King received national coverage when he was alive, and so he died a polarising and increasingly isolated figure. Just six days after his death, the Virginia congressman William Tuck blamed King for his own murder, telling the House of Representatives that King “fomented discord and strife between the races … He who sows the seed of sin shall reap and harvest a whirlwind of evil.”

But in the intervening decades, the mud slung at him has been cleaned off and his legacy shined to make him resemble a national treasure. In the two years before his death, he did not appear in the Top 10 of Gallup’s poll of most admired men of the year. In 1999, a Gallup poll of the most admired people of the century placed him second behind Mother Teresa. In 2011, King’s memorial was opened on the National Mall in Washington DC, with a 30ft statue sitting on four acres of prime historic real estate: 91% of Americans (including 89% of white people) approved. Even Donald Trump has thus far refrained from besmirching his legacy, hailing just a few months ago King’s “legacy of equality, justice and freedom”.

The process by which King went from ignominy to icon was not simply a matter of time and tide eroding ill feelings and painful memories. “History” does not objectively sift through radical leaders, pick out the best on their merits and then dedicate them faithfully to public memory. It commits itself to the task with great prejudice and fickle appreciation in a manner that tells us as much about historians and their times as the leaders themselves.