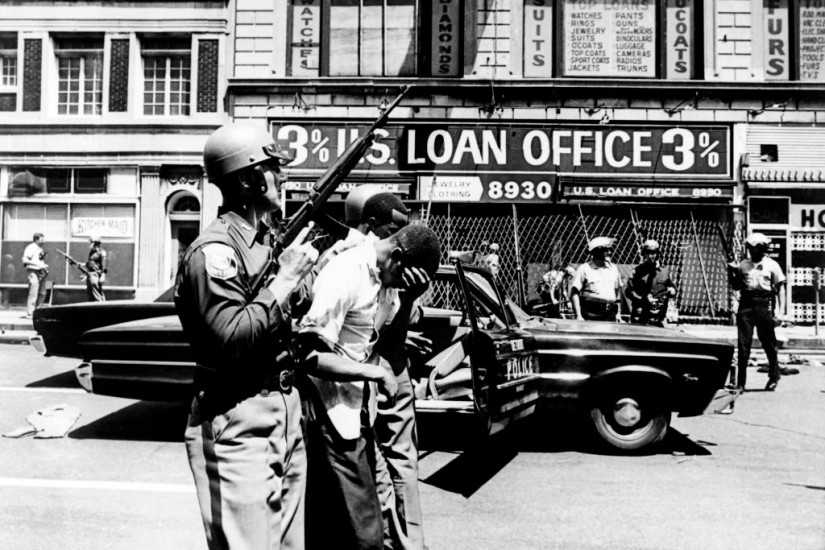 Policemen arrest black suspects in a Detroit street on July 25, 1967 during riots that erupted in Detroit following a police operation.
AFP/Getty Images
…

One of the most surprising findings was that participants in the rebellions tended to be better educated and more likely to be employed than the average resident of their communities. While conservatives would point to this as evidence that the rioters lacked legitimate grievances, the report’s authors clarified that most of these residents, if employed, “worked in intermittent, low status, unskilled jobs—jobs which they regarded as below their level of education and ability.” In addition to creating new jobs and eliminating discrimination in higher-paid professions, the commission recommended increasing and expanding coverage for the federal minimum wage and other ways to address low wages and underemployment, which were “as significant for Negroes as unemployment.” Rejecting Moynihan’s emphasis on shoring up male breadwinners, the commission called for dramatically expanding welfare relief and extending it to unemployed and underemployed adults regardless of their family status.

The most controversial aspect of these recommendations was their price tag, which the commission estimated would total between $20 billion and $30 billion. But it was external politics that prevented the commission and the Johnson administration from realizing any of these policies. Facing mounting criticism over the “stalemate” in Vietnam, Johnson attempted to bury the report. As his challengers in the 1968 Democratic primaries, Eugene McCarthy and Robert Kennedy, gained ground, Johnson momentarily reconsidered, seeing the report as a possible way to win liberal votes. But after McCarthy’s strong showing in New Hampshire, Johnson announced that he would not seek reelection, and it was clear that the report’s recommendations would be left by the wayside.

Even so, the Kerner Report cast a long shadow on the 1970s. It is true, as Gillon explains, that one of its most visible legacies was to serve as “an obvious foil” for Richard Nixon’s “law and order” rhetoric. A few days after its publication, Nixon claimed that the report’s “major weakness” was that it “blames everybody for the riots except the perpetrators of the riots.” That message was central to the campaigns that gave Nixon a narrow victory in 1968 and a landslide win in 1972, and it has become a central theme in nearly every Republican presidential campaign since then—including Donald Trump’s own “law and order” response to the latest protests against police brutality.

But conservative backlash was only one of the Kerner Report’s many legacies. It also had a tremendous impact on the liberal consensus and its understanding of racial inequality and urban poverty.