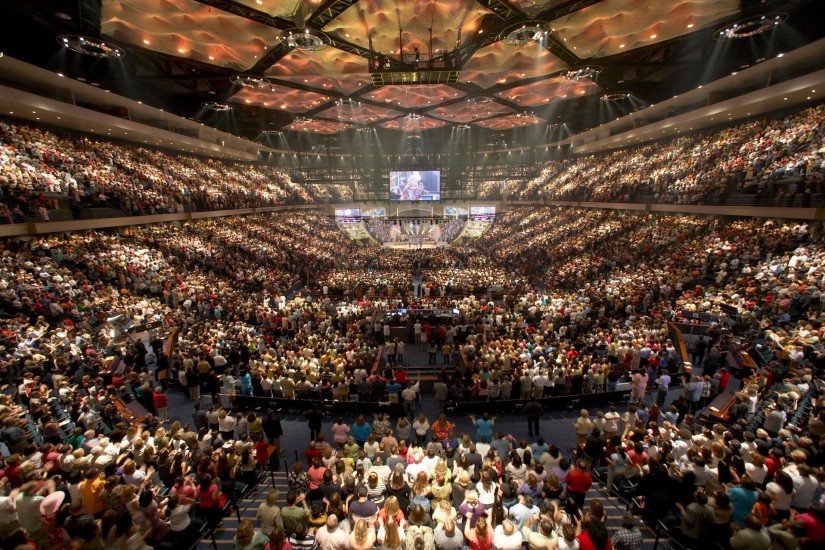 Building off of this research, Eagle sets out to shed further light onto the megachurch movement and its implications by studying all churches.  Like Chaves before him, he poses some early questions but then decides to focus elsewhere: “Unfortunately, data are not available to get at the underlying reason for this trend [of growth in megachurches]” (p. 2).  Instead of testing Chaves’ assertions about rising costs, or proposing his own alternative raison d’etre of megachurches, he decides to first challenge an implicit idea at the heart of Chaves’ lecture and other popular claims: that megachurches are a fresh phenomenon.  Eagle acknowledges that the trend of increased concentration is new, BUT the central ideas motivating the megachurch are very old—both New Testament-old (e.g., Acts 2:41) and Reformation-old.  Eagle focuses his “historization” of the megachurch on early Protestant sources including reformer Martin Bucer and the Huguenot architect Jacques Perret (see Figure 2.1 for Perret’s “idealized Protestant temple” that would have held gigachurch-size attendance).

Eagle traces the development of the megachurch idea through the history of church architecture, which since the Reformation has prioritized preaching to large crowds, up to the moral reform and urban outreach strategies of later American revivalists.  In doing so, he adds another prong to the definition of megachurches: not only are they consistently large, but they are multipurpose.  They offer a range of services to attendees and neighboring communities, both as tools for evangelism and social ministry.  Megachurch campuses reflect this by including various amenities for members and communities—including cafés, libraries, sports facilities, and settings to provide social services.  I especially appreciate Eagle’s discussion of church marketing techniques that have “sold” the elaborate array of services offered by large churches since at least the 1800s.  This historical overview, organized around a clear argument, replaces the typical lengthy literature review in most dissertations.  It ends with a concise summary:

“[Megachurches] represent an enduring model of ecclesial organization in Protestantism, stretching back to the early seventeenth century.  Situating megachurches in their proper historical context should help us avoid both starry-eyed wonder at these spectacular congregations and curmudgeonly critiques of them as flash-in-the-pan organizations with little staying power” (p. 30).